Back to Hershey TT

Woke up this morning , both of us slept quite well. Jim was up first, I got up shortly after. I made him paleo blueberry pancakes and eggs. I had oatmeal with quinoa and applesauce and raisins and cinnamon. A lot of RVs left earlier,  the one waved at me that we actually talked to. And then more were coming in the morning, which we thought was strange. We made the bed and put some things away didn't want to leave too early we only want to arrive and Hershey TT closer to noon, check out is 12. There's a lot of activity going on so as we watched out the window Jim saw a guy pushing a car, he thought maybe they needed gas, we had a little bit left from the Genny so he walked over to see what was going on. While he did that, I watched as I started the blog from the day before. Turned out he needed a jumper cable so he came back to get ours and then walked back again he was there for a while. One time I looked up and they were pushing it quite a distance. When that was over he came back and then this guy by himself in a small Class C pulled up parked across from us, he started talking to Jim about our generator and are set up. It was quite upsetting that he let his dog out and he pooped in the grassy  median I never saw him clean it up, believe  me I was watching,  I told Jim to offer him a bag maybe he didn't have one to clean it up, but he didn't want to get involved. I was ready but the opportunity never arose and I didn't want to be confrontational, that is how RV's get a bad name, but we can always say anything in a nice way. So when their conversation was over, Jim came over and said are you paying people to distract me. By then he was chomping at the bit, and ready to get out of there. Because people were coming in and he was afraid we would get parked in. The way the parking lot was in chunks with a medium in between you had to squeeze up and around and turn. By then it was probably after 10:30 and we finish putting things away. We really enjoyed our night at the casino. Way better than truck stops, very quiet from my perspective. I took my phone and called Jim so I can walk as he made this tight turn. And right when we started to move this lady walked up to me, I didn't realize it but it was the lady that was with the guy that Jim pushed her car. And she said their battery was dead they needed money and had nobody to call and bought a whole bunch of antiques and brand new high thread-count sheets, wanted to know if we were interested in anything, I guess they were going to buy another battery. We felt bad for them but what could we due, at this point Jim helped as much as he could. We got turned around and we pulled out of there just after 11. We wanted to stop at the truck wash and wash the FW but the slight drizzle and Jim thinks they change the entrance configuration so without checking, and with the rain we decided just to head over to TT. Total miles driven today's trip 25 miles. The truck also gave us more stats we drove 10,050 miles, the truck was running for 241 hours, with 988 gal of fuel used with an average of 10.2 MPG. We arrived at TT at 11:45 the manager was Manning the ranger station which she never did before. So we said our pleasantries and started our drive to find a available site. H Loop is the only one that has free 50 amp, and it was full there. So we drove over to C Loop and got one of our favorite corner site C 67. We had got set up a little bit Jim trying to get dish but was too cloudy, will try later.  He took a shower we made arrangements with our son's to meet at Hoss's and we went to pick up my MIL. We had a nice family meal with everyone was a great visit. 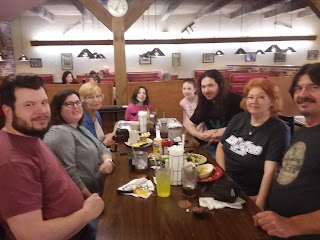 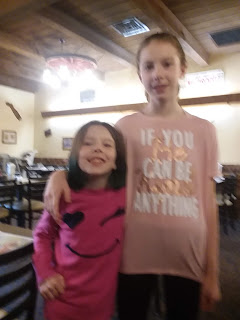 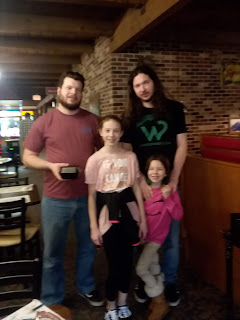 And made plans for Easter and possibly Memorial Day. We dropped my MIL off, started my car let it run for awhile, I will take it back tomorrow after we take her for breakfast. We came back to TT drove around a little to see what was empty it was really raining, they had some tornado watches but not too close to our area, thank goodness. Jim played with the Satellite Dish again and pulled in a pretty good signal. I washed the dishes, took a shower while he did that. Then we called Direct TV and changed our service location to here. New thing now they always want to know your old address which was somewhere in Texas who can remember so we had to look that up, what a pain. He said it would take a few minutes I was hoping to watch our shows by 8 which seems so late because we've been used to them coming on at 7. When she got it switched over, it was about 8:10 took almost 30 minutes but the weather was on with the severe storms so we didn't miss much. We have a lot to do before Jim goes back to work Thursday I go back the day after Easter. So the next blog will be about our Easter family get-together so we will be taking a much-needed Long blog break, sure no one will miss it. We have a lot of chores and things to get done in the meantime. thanks for following along hope it wasn't too boring.
Posted by Darlene at 8:13 AM