This morning when I got up, I got to watch the whole Today Show. I didn't quite get up at 7 but 8:15. So I  did miss the first hour and 15 minutes. For breakfast I wanted to try something new in the IP. I'm on a Facebook group with instant pot. They were talking about making egg bites. But I don't have a mold. They were talking about different things to use. So I tried it using the foil muffin cups, in the new wire nesting baskets. First you put for eggs in a blender, I also added onions, pepper's, ham, spinach, and cheese blend it up, poured  into the cups. I put it in the pot for 3 minutes. They were very good, Jim like them too. 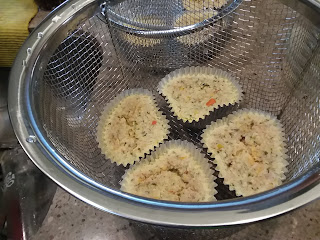 Next time I will use some spray before I put the egg in because they did stick a little bit. After breakfast Jim took a shower, then sat outside while I watch the rest of the Today Show. Then I started cleaning, I had a few things I wanted to do. Sitting in my chair I can see the back wall behind the stove what's a little messy. So I started with that, I wiped down the wall, and the counters, wiped out the microwave really good, stainless steel always shows smudges drives me crazy. I cleaned the fridge out really well. I'd like to do it when it's pretty empty. Leaving here on Thursday and we're  going to Boondock at a Walmart, I will fill it back up then. It's almost easier on travel days when it's full, because things don't move around so much inside. After all that was finished we got ready to take a drive and look around. Jim took the trash out for me and started talking to her neighbors behind us. They told us a few places we could go, but would be better if we had a child or two with us. There was Dinosaur World and Kentucky Down Under, where you can walk with the kangaroos. 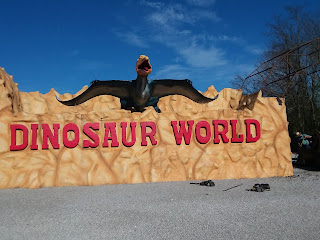 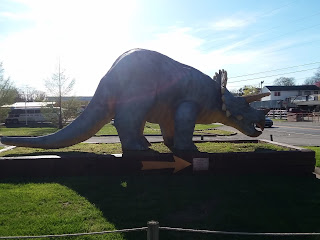 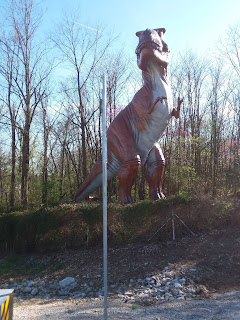 Today's weather was so beautiful, we actually had to turn the air conditioner on because it got so warm inside. I usually wait  as long as possible, but it got hot. High today 83. We took a drive around stopped at Mammoth Cave. 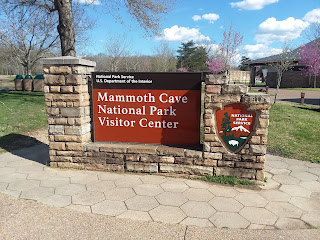 They said it was one of the largest caves around. With over 400 miles mapped out. When we were going inside a whole bunch of Mennonite children were coming out, with some of their Elders too, we didn't know they had that population in this area. They had a really great exhibit inside where you can walk through and see the history of the cave. Mike Rowe did a narration, was very interesting there's actually a guy that died in the cave in 1820s or something, they looked for him and found him dead 17 days later. And was told later by a shop owner that he was  there for many years, and they finally took him out and give him a proper burial. We were in there for quite a while then we took a drive looking for a Diet Pepsi, we stopped at a KFC and had a snack there before we left with our large Diet  Pepsi. Then we drove around a little bit more. Bryan called while we were driving around, they got home around midnight, drove about 15 hours, but everything went well and arrived safely, he will call later for them to talk more. We wanted to go to a grocery store with out driving any farther, we ended up stopping at one, but it was kind of like discounted store we have at home call Horning's or Country View. We only found a few things we can buy, we just don't have room to stock up on a lot . Later we decided to wait till Thursday when we Boondock at our next Walmart and I will shop then. We stopped at another store that had big pile  of firewood outside. We went inside and talked with a lovely woman about fishing there we also bought some wood got a pretty nice pile, turned out the wood wasn't that great,  was pretty dry but a little on the rotten side. She was the shop owner that gave me more details on the man that died in the cave. You can pay to fish in the pond, they're open till 10 tonight and closed on Wednesday, but we leave on Thursday. I told Jim the only way that would work is if you took me home right now and came back and fished, which he didn't, but kind of would have liked to. They stock it once a week, sounds like it was full of catfish, some quite large. I had a nice chat with  her while Jim loaded the wood. Then we went back to the FW, had a light snack, Jim  unloaded the wood we sat outside for a little while, was so beautiful Jim started a fire. 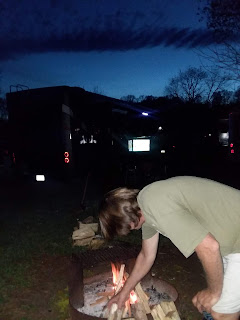 We enjoyed it for a while, I went inside at 7 to watch The Voice. It still is weird everything being on an hour earlier. Jim was still at the fire and talk to Bryan for about 2 hours, guess they miss each other already. I took a shower before he came in for the night.
Posted by Darlene at 1:52 PM