Long Walk in the Wind

When I woke up this morning I was feeling a lot better. Jim was up first and made coffee. Later we made English muffin, egg and Canadian bacon sandwiches. Sat around most of the morning. Had some white chicken chili and a salad for lunch. Went for a long walk, about 2 hours in the Wind, went all the way out to the Family Center which is right when you come in the gate to the left. And beyond that is a whole other loop called I Loop, which we didn't even realize was there,  was a couple sites we could have used, with a nice view of the lake. 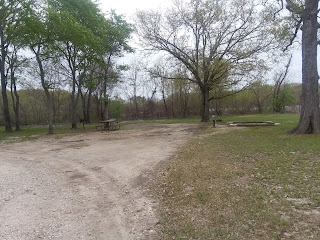 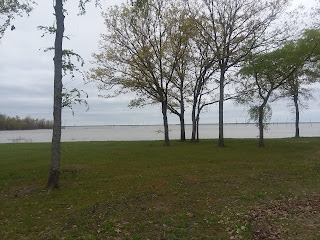 maybe next time. When we first left we talked to our neighbors. They brought the truck and we're moving there camper and all their stuff to their new site. The TT maintenance guys later moved their shed, was a lot of work for them I hope they gave him a financial break off their site. I hope they label it properly so no one comes in and takes it before they realize there's no electric there. We came back, Jim finished watching the hockey game that he started before our walk. Too bad they lost 5 to 2. I did a couple loads of laundry. Thought about staying one more day. Tomorrow we were supposed to leave and we were going to Boondock for a night. Jim wanted to drive 5 hours two days in a row, witch we would have to do if we stayed another night. So instead of procrastinating we will still leave tomorrow, and will stay on the road for two nights, and travel less than 4 hours each day. I made some dinner of leftover grilled turkey burgers and the grilled vegetables he made. Jim dumped the tanks to get ready for tomorrow. We both took showers watch the little TV. Can't believe you're leaving tomorrow
Posted by Darlene at 4:23 AM