This morning Jim was up at 6:30. But I was not. I think I stayed in bed till almost 8, before slightly getting yelled at to get up. As I said last night there was more trucks close to us, and the parking lot was quite full. I made us breakfast, pre-made lunch as I always do. Jim torqued the tires and we got on the road around 9:30 a.m. today we have a total of about 250 miles to go. We are heading to the Hollywood Casino in Grantville, Pennsylvania. Sunday we will go into TT  for 3 weeks , we are so close to  home  but we want to go into TT on Sunday  that's why we stopped here for the night. We both worked here together 40 years ago, its where it all started. So we've come full circle it feels like. Our first stop for the day was that the West Virginia Welcome Center. Then our last fuel stop is in Maryland and exit 10 on 81, the diesel was $0.36 cheaper there then Pennsylvania. Later we  stopped at a rest area and there was no place for truck / RVs to park, so we kept going. Wanted to grab lunch, but  we can wait, lets just go.
When we arrived at the casino we were going to enter from our normal entrance we were used to. But we saw a sign that said trucks and RVs, so we went in that  entrance. We arrived right before 2 p.m.  did not see any other RVs anywhere. Went passed a row of trucks, we did not want to park there, no offense but had enough of the trucks last night. Plus it was very muddy there, and backing in would have been difficult. So as we went further into the parking lot there were signs that said no RVs or trucks. OK then. Huge parking lot very empty, and level.  So we parallel parked along a grassy median. We wanted to talk to someone inside before we got situated. So we went inside asked the guy at the entrance and he said I don't think it'll be a problem. So we made it sound like we were going to eat something and do our thing inside, we walked around a little but the smoke bothers me so much,  we went out another exit and came back to the FW. He touched the jacks down, Jim got the generator hooked up, we put the slides out. Ta-dah,  we are at home!  Jim took a shower got the generator going. I got set up to do my thing, and he did go inside to gamble a little bit. While he was in there I took a shower, read some of my blogs. He was back shortly after that, said he won $25. I heated up the spaghetti I made in the instant pot last night. I made a salad we had dinner together. The battery was charged up to 100% at this point .  And it must have been the way the wind was blowing , and I had so many windows and the door open .  It seemed like the fumes were coming in .  So Jim gave the Genny a break, and turned it off  and then he went back inside a little longer. By this time a few RVs did roll in. The first one was a fifth wheel. They drove around a little bit I guess until they saw us came over and asked us if we got permission to stay here. She said they were here a couple years ago and at  midnight security knocked on the door and told them to move, to a different area of the parking lot. I told Jim later I would say, do you know how much money we spend in their last night there's no way I'm moving. But it never came to that, of course. Remember most of what you fear, never happens. As I'm doing the blog the following morning they just drove by and waved to me, as I was standing by our Open Door way. Her name is Carol she said they were heading to Syracuse New York, but her license plate is Florida, okay. They turned around in the parking lot and the truck said NY and the FW was Florida. Later when Jim came back he said now he only lost $5 total. So I'm okay with that, then we watched a little TV together. He shut the generator off again, it was back to 100% he went to bed. I stayed up and read until 11:20,  I turned the TV back on, watched SNL until 11:50 turn off the TV and went to bed myself. 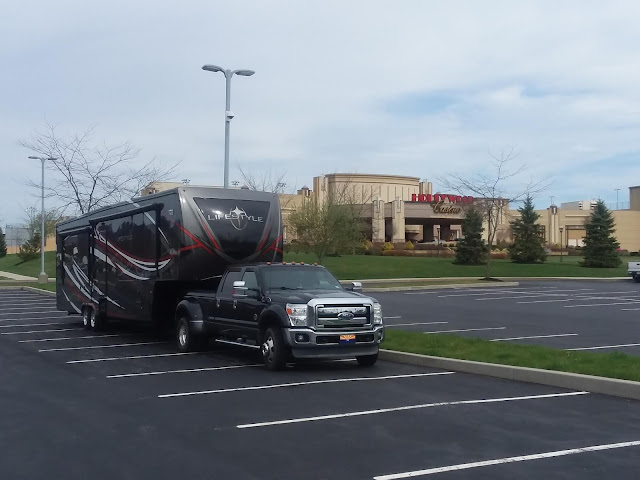