This morning I got to watch all of The Today Show too. I made breakfast, Jim had the rest of the  IP egg bites I made yesterday,  I also made some oatmeal. I put a little bit of quinoa in the IP. Tomorrow I will mix it with my oatmeal, makes it higher protein. Jim went  outside and torque the tires for tomorrow,  he got the grill out for later. And I could have sworn I seen the caulk gun in his hand again. I called and booked us both a doctor appointment for when we get back. We were trying to plan the rest of our day. It was another beautiful day it was about 86, so sunny. We picked up a coupon book somewhere yesterday with a lot of different things to do in the area. we decided to go to the Lost River cave boat tour. We called ahead for reserved seating for two pm. We had lunch before we left I made the rest of the pizza I froze from Walmart. The Lost cave is in Bowling Green Kentucky, which was about a half an hour drive away. We arrived at1:45 went in and signed up for the tour. It was very fascinating we had a very good tour guide. 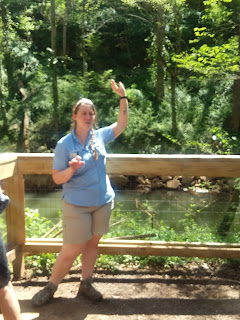 She gave us many fascinating details about the history of the cave like. They hold wedding receptions there  to this day . They used to have a bar there. They used to tell stories about Jesse James hiding out in the cave 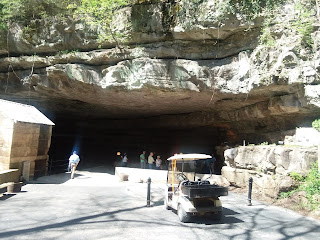 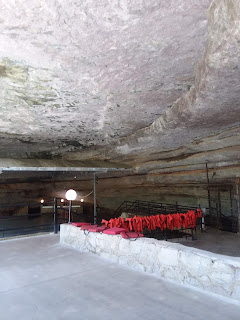 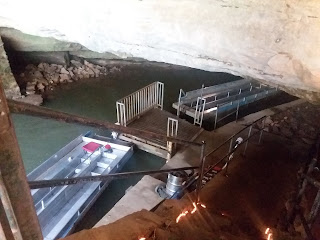 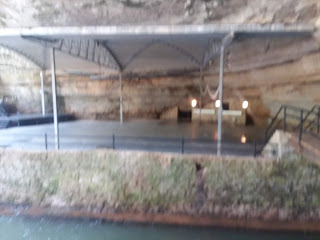 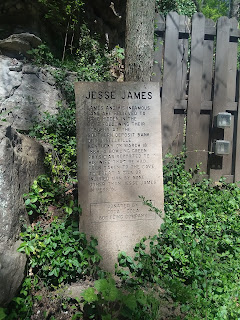 . When the tour was over we went to the gift shop and looked around. Till we walked back up there it was so hot, it was very warm out. After we left we went to Taco Bell to get us each  another large cup of Diet Pepsi. We also shared a Nachos Grande as our snack. Then we went to a fuel station to fill up with diesel. Jim suggested I run in and see if they had Diet Pepsi for sale, and to our surprise, they  had 2 liter bottles for 99 cents each. I asked if there was a limit to how many you could purchase, she said no. So I went out and got Jim we bought the only eight bottles they  had left on the Shelf. Then we took a drive heading back towards the FW. We put everything away,  Jim got the grill on to make grilled chicken for tomorrow and then pork chops on the grill for dinner tonight. I put two large potatoes cut in half in the instant pot, for 15 minutes. They get so good in there. Topped with butter and sour cream I also made a whole bunch of mixed vegetables. We ate outside while we watched Survivor. Jim had preset a fire earlier and he lit that after dinner. 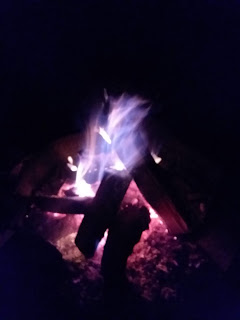 When it was over I came in washed the dishes did one more load of laundry, cleaned up and tried to put things away for tomorrow. Took showers and watched a little TV, I gave myself a pedicure, and vacuumed before bed.
Posted by Darlene at 2:12 PM