IN the Home Stretch Now

Woke up this morning in our nice WalMart spot. They are open 24 hours, but when I woke up in the middle of the night,  it seemed very quiet to me. But Jim said when he woke up a little, he heard noises. But he's the big protector man, so he is always listening, and hears things. He's busy keeping watch. ( a line from a movie, do ya know which one ) We both woke up around 6:30, although at the time we didn't know what time it was, seems pretty dark out. We both got up, made the bed,  and put our travel items back on it. Jim got the generator going  first thing, and I made Jim a big breakfast of potatoes, leftovers I made in the IP,  onions, peppers a little bit of leftover pork with eggs, he said it was good. I had a bowl cereal and a yogurt. As warm as it was yesterday  the camper stayed nice overnight . I left the roof vent open in the bathroom . It was about 72 I think upstairs when we got up . We continue to get ready, not that much to do when boondocking, because you don't have that much out. We only put 2 of the 3 slides out also. We watched a little Morning News and weather. Jim as always was in a hurry to leave, especially since we were both up so early. Which I don't think he was expecting that, especially for me to be up. Once we closed everything up, I took the trash out, picked up the new trash that was in our backyard. And walked it over to the trash can I saw next to the shopping cart return area. We pulled out right before 8:30 a.m. we stopped at a Love's for fuel, and potty break in Meadowview Virginia.  Made a quick stop in a rest area. I talked to my brother for a half an hour today  about our plans to get together for Memorial Day  weekend . And then kept driving till we arrived at our final destination. Which is Lee Hi Travel Plaza in Lexington, Virginia. We drove a total of about  264 miles today, arrived here just after 1 pm. Jim fueled up the truck as I went in to pay, per our usual routine. We are doing something different this time though. We've been here many times before. But always stay in the small Campground that is back behind the truck stop. Lee hi Campground, which is about $34 a night. But as an omage to my father, in an attempt to save money, in his honor. We are Boondocking,  the last 3 nights we are on the road. Which is nice to do when you have a choice. Also now we have the equipment to do so. I guess I'm kind of looking at it as a challenge. That we can do it. Although Jim does most of the work, I just cook, as he says per usual. So last night we saved money by staying at Walmart, tonight we're saving $34. And we didn't go into the IHOP,  that was right across from us last night. There is a big parking lot around with a few trucks when we arrived. We went all the way in the back, where we wanted to park there was already  another truck there.  The truck would have been facing the campground we decided to back up at the other end of the parking lot instead. This is our view out our window in the very back. 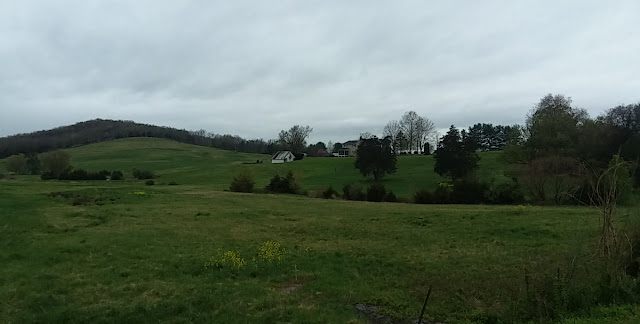 Jim started to back up and I said you know the only reason I'm not getting out to watch you is because there's nothing back there. And he said you see that truck driver over there is watching me. As he pulled up  and back a couple times. So when he was almost in I got out to look at the final last couple feet. And this truck pulled up next to Jim and rolled down his window. For a minute I was worried he was going to yell at us. But instead he said something like a real truck driver doesn't need someone to watch him back up in a big parking lot like this. LOL he was being funny, which it was, then I think after he said it he was afraid it would make us mad,  but we both enjoyed the good laugh, and told him that. We had a nice chat after that, Jim even got out to talk to him and he said oh I'm glad you thought it was funny now that I see how big you are. Tall, he is very TALL. So after we said goodbye to him. Jim finish parking put the jacks down. By now it was drizzling a little bit again. The weather is not as warm as yesterday was about 70 today, we had a very brief shower,  some heavy rain maybe half an hour or less. We came in put the slides out had lunch because we hadn't eaten yet and then it was like 1:30. Enjoyed our view out the back. I'm going to make spaghetti in the instant pot later for dinner, we should have some leftovers for tomorrow night's boondocking. 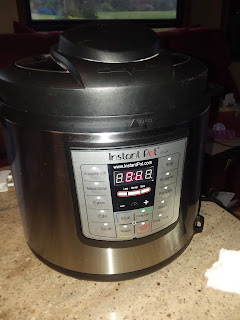 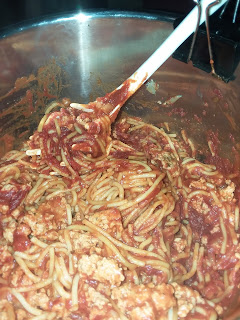 Saw a lot of Pennsylvania plates today. Jim took a shower after lunch I took one after dinner watched a little TV and went to bed. Was a nice spot considering the trucks around us. As the day went on and then to the evening more pulled in. One on either side of us quite close. But the price was right. 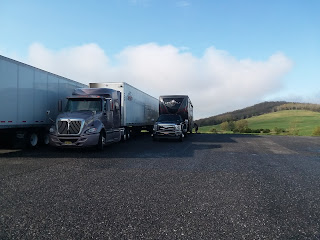 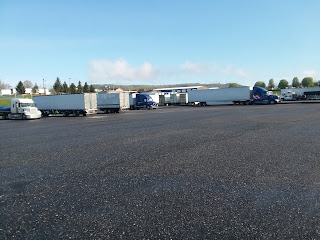