We both slept well last night our friends were tired after their long travels. We all slept well My eyes are itching still driving me nuts. We watched a little Today Show and I was planning a big breakfast to feed everyone. Bryan has a Blackstone and grill once I saw him cleaning it, Jim and I took everything over for the breakfast I was making. Sally and Bob had bacon and orange slices. Vicky made some scrambled eggs, I made French toast on the Blackstone. I had some sausage links I pre-cooked in the IP then put them on the grill for a couple minutes. It was so fun to feed everyone, it was very good and they all seem to enjoy it. After we cleaned up from breakfast took everything back to the FW. We got ready for our day in Nashville with Sally and Bob. We left about 11:30 a.m. we walked  to the entrance of the campground and Jim called for an Uber. We had them take us to 2nd Avenue and Broadway, it was at Kid Rock's Bar. 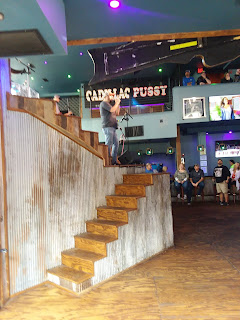 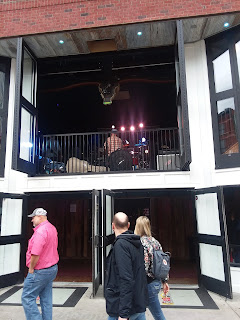 Which is always rocking and was very full. Jim and I can't believe how many more people were everywhere compared to December when we were here last. We walked around different bars they had a drink here and drink there,  wonderful music everywhere. A lot of interesting people to look at. 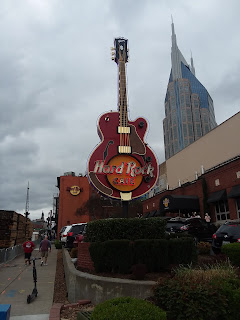 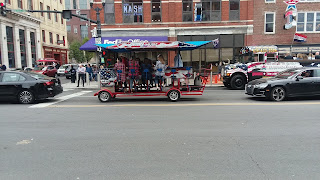 We went to Ole Red, Blake Shelton's bar & restaurant, our third time now. The food is really good music playing all the time Jim had a burger and I shared a pork quesadilla with Sally, was huge, Bob had a ginormous sandwich, which he took half of it home and as we just got seated Sally saw some people that were from Canada that was at their park in Texas where they spent the winter. So she talked to them, and they actually joined us for lunch.  I think it was John and Rita. We had a wonderful lunch together and then headed out to walk around some more. They wanted to get a couple shots Jim wanted Fireball,  two of those for him and Bob and a beer and Sally had a lemon drop, total bill $34. We were on the rooftop of one of the bars and you can see a river boat. You could also see where they were building a big stage were they have the NFL draft. 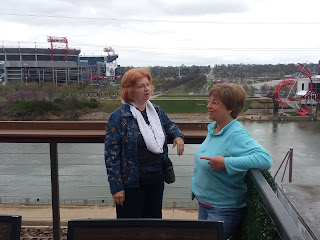 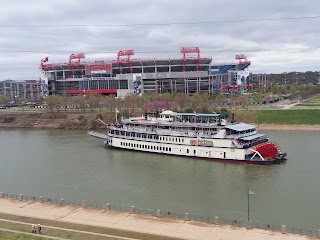 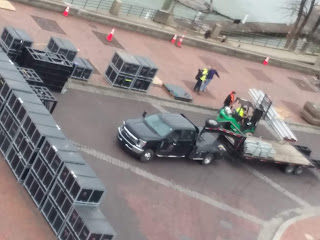 Called for return home uber around 5 p.m. . It was $34 to get there and $58 to go back home. We got home Sally let the dog out, and I borrowed a couple ingredients from them. And then with the IP I made a big pot of Bryan's favorite soup which is a beef noodle tomato based soup. Whatever you want to call it. I was texting the lady from home that I work with. Bryan and his family were not home from their Adventure yet, they went to Country Music Hall of Fame. When the soup was finished, Bob & Sally came over to our RV and we ate over here. When they came home later Jim took a big bowl over for them. Also before we left I had made a buttermilk pie I had that in the fridge so we had that for dessert. We had a nice visit with them watched a little TV. Jim went to bed around 10 I took a shower. Watched a little more TV went to bed also.
Posted by Darlene at 5:47 AM