Working on our home

Jim was awake before me, he made coffee, I was up shortly after that, I made us a smoothie.  He went outside to start working. So I made myself some eggs and sausage and went out to help. Not that I do that much. Jim changed out all the old screws to stainless steel screws in the underbelly and taped over them. And change the license plate light that was out. I told him to sit down and take a break for a minute and I made him his sausage and egg's for breakfast. Then he put on shorts so we can wash the camper. Today's high 72 degrees. I washed the side of the truck that was closest to the hose. After we were done washing the camper and truck, I pulled some premade food out of the freezer and a steak for Jim. I had salad and some pre grilled chicken he made his steak. While he was putting all the hoses away we also got an anal rod from Camping World and he change that too. Should have changed it a year ago it was as thin as a pencil. Then we got ready and went for a bike ride around the campground. Some people were sitting by the road and said where's your Christmas decorations. We were a little confused. We got back to the camper, in about a half an hour later there was a Christmas parade that went by with a really cool old car and decorated golf carts here's a few of the pictures. 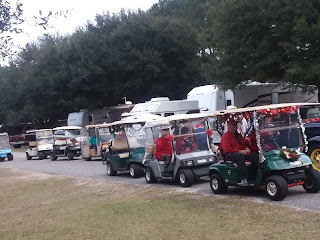 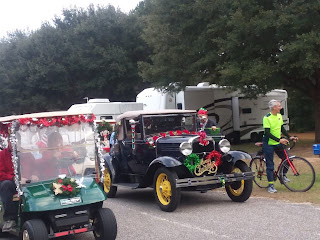 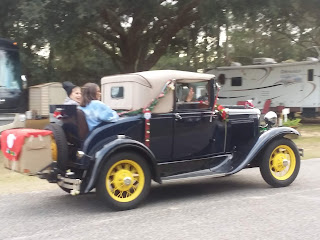 I was decorating our little tree too and sitting right by it when they went past. We both took a shower I threw a load of towels in the washer. For dinner I made yellow rice and mixed vegetables in the instant pot, pot in pot if you're wondering, and we had pre grilled chicken with that. Jim was working on the blog putting pictures on, it was about quarter after 6, Then we went down to the ice cream not so social. It was supposed to start at 6 but the blog delayed us so we got there at 6:15 and no one pays us any attention, and finally somebody said something to us and they got us ice cream and cake but first they told us if you're not early you're considered late for activities there, alrighty then, lesson learned. Which truly it is Jim philosophy too,  he's always early . We had a nice walk back to the camper look to the Stars, watch a little TV and called it a night.
Posted by Darlene at 6:53 AM