We have been at the Quentin Riding Club for 34 days. They tell us it is closing now so we have to move for our last two weeks before our big trip. So after work we finished packing up. Deb was down at the clubhouse and walked over and talked to her. 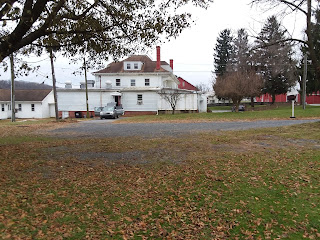 She told us we did not need to pay the typical full amount because we went through a lot of aggravation while we were here, which was nice of her to realize. So we gave her $100 a week which we thought was more than fair. Said our goodbyes, took some pictures and got ready to move.
Our goal was to get there before dark. We made it in plenty of time. They wanted to give us a different site. They like to keep the big ones that we wanted for people coming in for one night only. It was only 30 amp so we kept our big site. It was a little painful paying the bill over $500 for two weeks even with our KOA discount. 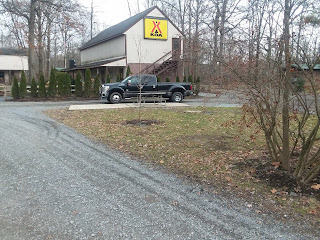 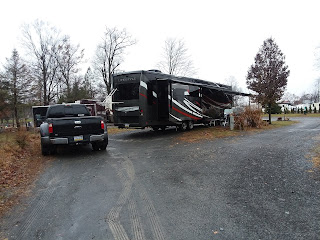 We got set up Jim put out the electric water hose I did some laundry. When it goes below freezing temperatures we turn the water off and use the water in the tank. They don't have the water spigot wrapped like they did in Quentin, so it can freeze on their end very easily.
We have leftovers for dinner and relax the rest of the evening.
Saturday December 1st
14 days and a wake-up call is Jim says I had off today we took his mother to lunch. We took her to Long Horn Steakhouse.
Sunday December 2nd we stayed home all day it was really nice. We waited for our friends we met in Florida to arrive from Rochester New York they were on their way to Florida. 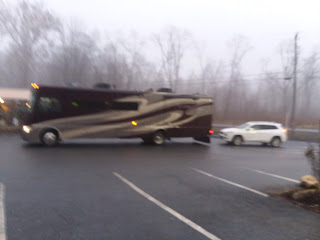 They got here around dusk and they set up and we all went out to dinner to funck's Family Restaurant which is right up the road on the military base fort Indiantown Gap. It was really good, we have not been there in years and years, we had a really nice visit. We left right before 8. We both had to work next day.
Monday December 3rd
I texted Sue and Tony Costanza a few times while I was at work. They were trying to get their TV to work and they had to unhook their car they had some issues they were trying to get figured out we planned on meeting for dinner again after work. Jim took my leftover half a sandwich from dinner Sunday night to lunch and a little piece of is one tooth broke. So I called our dentist to make an appointment to see what they could do with it before we left, I'm so glad they could see him we're doing that on the 4th. So we took Tony and Sue for a drive and show them the Quentin Riding Club where we stayed and then we went to the Quentin Tavern for dinner a place we really like. 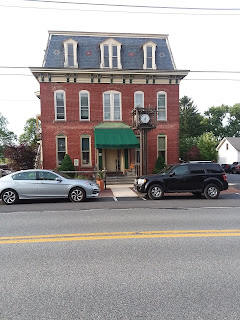 It was so good, had a wonderful visit. Then we came back to our camper they had given us some sausage that he makes they have a shop in New York. 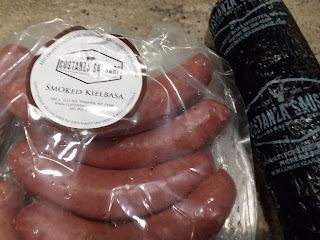 I gave her a fourth of a sheet pan and another round microwave pan and some non-stick foil I had. So she could practice using her convection microwave, I love mine. We had a wonderful visit they left around 10 we're such party animals it was so fun. Jim got ready for bed and I stayed up a little longer, per usual what a great night with wonderful people here's our picture from dinner. 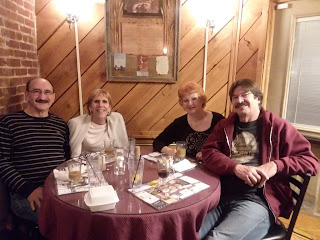 This place is 6 miles from where our house used to be. We used to bring the horses here and camp and ride the mountain for 8 hours.

December 4th after work we both came home Jim had time to shower I changed and we took off for the dentist. They have a new Young dentist working there Jeremy really great young kid he pulled a little broken piece out and filed down the rough spot said it would keep till we got home in April and then he could decide what he wants to do with a couple teeth that do not have a very good prognosis for a long future in our travels LOL.
We stopped at Redner's on the way home and got gas we had about 45 cents off a gallon and we came home and ate some soft leftovers. Had a nice relaxing evening we are enjoying being here Jim feels a lot more secure. It's fun to see the different campers that pull off the road for just one night in their travels, each night there's about 10 or so that come in. Lickdale  KOA is exit 90 off of 81.
December 5th I have off today watched a lot of the George HW Bush Funeral, also worked on the blog. Very cold today highs only going to be 38 for a short time.
I started instant pot creamy chicken and wild rice soup. 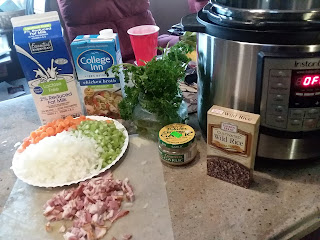 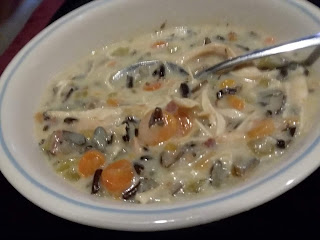 Jim took a shower and we went for a walk around to see the campers that pull in for the night. There was one from Vermont two from Quebec, California and South Carolina too. We went back had  soup for dinner Burgers he Grilled the other night we heated up, He washed the dishes, I did two loads of laundry and he went outside to turn the water off.We watched Survivor, worked on the blog and called it a night we have to be up at 5 a.m. tomorrow, but instead I have a half an hour drive instead of a three mile drive. I have eight more days to work the last four I will be training the new girl that is taking over for me.
Posted by Darlene at 4:27 PM