This morning we started out with a smoothie, then we had some eggs. We did our normal morning routine, I put the sheets in the washer and then hung them outside to dry in the beautiful California sunshine. Then we went for a bike ride when we got back Jim put them away in the back of the truck. 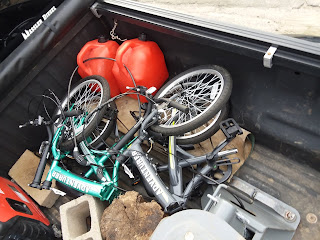 We were talking with our neighbors behind us. Jim was putting some stuff away.  I took a shower, then threw the towels in the washer. I walked up with a book I wanted to donate to the library here. I wanted to talk with Mary Jane, they had the craft sale   at the activity center,  that they do every Friday, I wanted to say hi to everyone. I was talking to Mary Jane and she said why aren't you up here, I said because I'm lazy. We had a nice chat I went back to the camper, Jim and I got ready for our big shopping trip. Before we  left had a quick lunch, the last of the leftovers. I was going to shop at Wal-Mart alone but Mary Jane was telling me about this store called WinCo Food. Never in one before, Jim found it we decided to go in together, and then I figured we would go to Walmart,  and I go in there alone. But the store was so cool and huge a lot of bulk items, really good prices a lot of produce a lot of organic, they had everything.

Jim did very well and it was a lot of fun for me. We restocked everything, all for $175. we felt like we got a lot of things for that amount. I was afraid I bought more than would fit in the freezer. We did so well in the store we decided we didn't even need to go to Walmart. We came right back to the FW Jim Carried everything in I started putting stuff away. It took a long time to do. Then he put the grill on, we  grilled chicken first and then some zucchini planks with olive oil and spices, and then some green beans. For dinner we had bought some shrimp cocktail, and coconut shrimp which we heated up on the grill, I made a coconut pineapple dipping sauce for it. Then I made a salad put some chicken on it, then we had some grilled vegetables and for dessert my cherry Square. Then we started putting some stuff away I washed the tablecloth off outside. Put some stuff away, cleaned up a little bit.  I decided to go up to the pool for a evening dip in the hot tub, but this time it was around 7:30. And then I came back changed my nail polish color, to Valentine's Day red. Jim found Dirty Dancing so we watch that, the news and went to bed.
Posted by Darlene at 8:17 AM