Walking, Water, what a Winter Winner

CALIFORNIA is. I was awake first today, and I actually made the coffee. I had some oatmeal with applesauce from last night  first . I was downstairs for a while before Jim joined me, and I made breakfast. I made sausage and eggs, and he also ate the last of my omelet from IHOP, that thing is finally gone. I worked on the Blog a little while we watched The Today Show. Then we got ready and went for a walk. Came back Jim took a shower. Last night we almost stopped at Del Taco on our way home from our adventure. But we decided not to, to keep it a free day. It's a fun challenge to do. So we said we would go today. Pretty much the Taco Bell of the West. Then we went out and found a water kiosk to refill our spring water jugs. We drove around a little bit saw some fields that had artichokes, something I never saw before growing in a field. And what looked like spinach, some kind of greens next to it. I took pictures there a little hard to see. 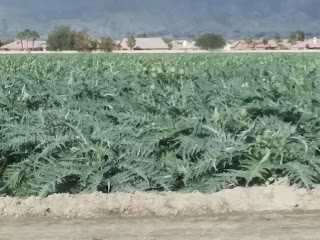 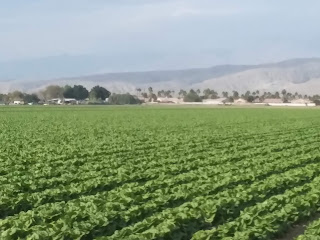 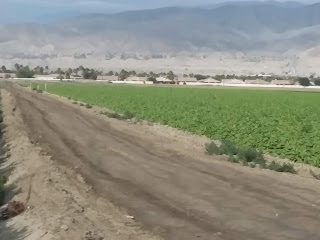 We turned around in a Walmart parking lot, we found one a lot closer. We also went into a hardware store we needed a few brackets, Jim wants to try to stabilize our new end table a little bit. Tomorrow will be my big Walmart shopping day probably,  alone definitely. We went back to the FW then. The weather was nice up until that point. We got the grill out it started to rain a little, Jim grill a steak for dinner and I wanted to use up some leftover frozen fish and made baked Citrus fish with almonds and beans recipe I got at Publix in Tennessee last year. I made dessert graham crackers with diet pudding and some cherry filling on top. I made a cherry square with the leftover cherries for tomorrow. I also made a small amount of veggie soup,  only because I didn't have a lot, the cupboard is pretty bare. It's not that bare, you just need to be creative with what's left. Of course I made it in the instant pot. It started raining a little bit more so Jim watched his hockey game inside. We did our normal evening routine and had an enjoyable rest of the evening. I just wanted to mention I don't have things in paragraphs because when Jim puts the pictures on everything moves if I do. Not sure how to do it without moving the pictures all around. That's why yesterday's post was one big long-running paragraph,  with the pictures at  the bottom, because they all moved around. If anybody knows how to fix it let me know.
Posted by Darlene at 8:13 AM

Email ThisBlogThis!Share to TwitterShare to FacebookShare to Pinterest
Labels: Thursday 1-31-2019