I woke up first this morning and made coffee. I made a smoothie first, then I made eggs, sausage we each had a mini muffin and 1/2 in English muffin.  I tried  to enjoy my second cup of coffee, as Jim was getting rammy to get moving.  So I calmed him down and started getting ready myself. We were ready to leave about 9:45 and I came outside and we had just put the slides in. Jim went to put the landing legs up and nothing would move. Rutro.  So he had to do some investigating and troubleshooting about what was going on.  In the meantime I said goodbye to our neighbors in front of us Lucy and Paul they were going to play pickleball. I said we should be gone till you get back, if everything is going our way. Turns out when he put in the new AGM batteries there was one wire luckily in the front easy to get to was not connected. Funny how that makes all the difference in the world,  Because the lights and everything else worked it just wouldn't work the landing gear. so it was a quick fix and we got hooked up and pulled out around 10 a.m. I said goodbye to our other neighbor and he moved his car for us to make it easier to pull out. But we really didn't need him to.  We drove non-stop till we got to Pio Pico which I still can't believe. A lot of the drive was beautiful it just kept getting greener and greener. It rained a little bit on and off which was so bizarre for California. A few times we got into some really heavy crazy traffic with at least 5 lanes. And two places where you were all the way to the right and it turned into an exit where we had to quick get back over to the left lane again. I hate that. As usual Jim did great and we arrived around 1. We pulled into the south side of the campground to register which took a few minutes. it was very busy when we first arrived so I ran in the camper quick to go to the bathroom.  Then you have to pull up and do a big u-turn and go over to the north side, and go try to find a site, no sewer only 30 AMP, then the next day which is Monday, you have to go do the Sewer Social as they call it.  It's kind of like a sewer lottery we're first come first serve whatever sites are available. We probably are just going to stay here though and rough it, ration our tanks  since we have two black two gray, we're booked for 3 weeks but probably will leave a few days earlier to do some other stuff.  We found the site G 10 backed up against the hill, 30 amp water that's it, not too bad for what it is over here, we're just going to stay.  I pre-made some chicken wraps before we left which we ate as we were setting up. We kept set up to a minimal,  I got things organized on the inside.  I still never vacuumed, still procrastinating.
A first test for our new AGM batteries went very well. You're not supposed to take the batteries down past 50%. And we had the electric off for 4 and 1/2 hours. And we used 17% of our battery life, so we still had  33% usable battery life left. Of course the fridge was running, we ran the Jack's up and down and the slides out so we are pretty happy with that. So hopefully we can go a whole night sleeping in a Walmart not have to worry about it shutting off. We  really have to make sure they don't go under 50%. And then they charged backup very fast too.
Jim got the satellite set up pretty quick. After we registered the Super Bowl was on so we came back and rewind it watched it from the beginning. Later I made dinner, I had the rest of my soup I made the other half of that pizza I heated up some chicken and the rest of the grilled vegetables I made a salad for myself. as soon as the pizza came out of the oven I had mixed up with chocolate chips zucchini cake and put that in the oven. While the cake was baking Jim continue to watch the Super Bowl, and I took a quick walk around the campground for about 40 minute walk. When I got back he had taking the cake out of the oven and later while we watch the Superbowl we had a few Sun chips and we had some zucchini cake with vanilla frozen  yogurt.  Was a very good Super Bowl party for 2. I washed the dishes later and  took a super quick shower and we watched the news glad to finally be here. When I went to take my shower, for some reason there was no water because I heard the pump running. So I didn't get to take a shower. Tomorrow we'll see what's going on. 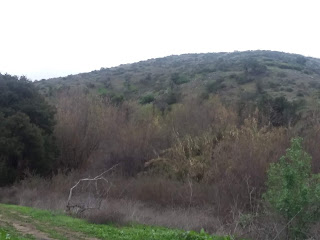 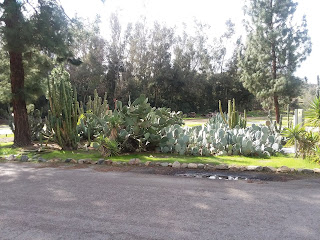