It was nice to wake up and not have to rush off anywhere. Jim has the satellite setup but we no longer get our local channels, we were getting from Palm Springs. So you were also hooked up to the cable here at the KOA. Watched a little TV until I got up the news shows were over, course we're not sure what time it is or when they come on here. I had cereal  and yogurt, of course Jim's Wonderful Coffee too  and he had some eggs a piece of my Texas toast from last night's barbecue meal. We also each had an orange we bought out of that pickup truck in Benson Arizona. I threw a load of dark clothes in the washer. Jim washed the dishes. And we got ready to head to Roswell, and check out the aliens. 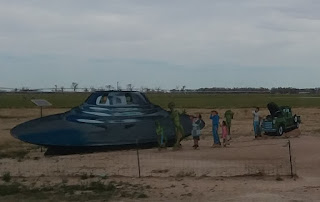 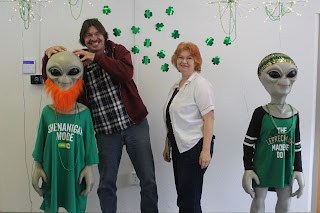 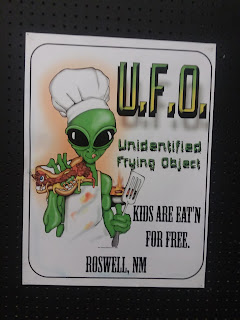 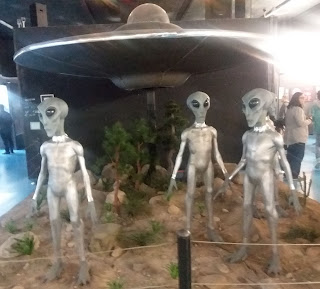 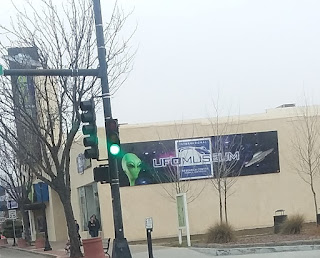 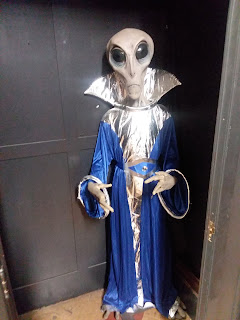 Apparently in 1947 July 9th on the outskirts of Roswell there was a debris field that no one could explain the contents of, there lies the mystery. We went to the visitor center had pictures taken with aliens dressed up for St Patrick's Day. Walked around a lot of stores and shops, the ones I wanted to go into Jim didn't. We ate at a Subway for a late lunch was pretty good. We walked around a little more. Then we headed to Sam's Club, people always ask me what do you get when you go to Sam's Club and your Full-Time in your FW. We brought  bulk pack of magic erasers, too low sugar protein bars called detour very good for travel days, two big bags of kale salad mix, rotisserie chicken, bunch of mixed unsalted nuts and cashews, variety pack of batteries, big 36-count Diet Pepsi Cube. But I did want and couldn't find was unsalted shelled  roasted  sunflower seeds . We had a few snacks while we were in there drove back towards Carlsbad to our KOA, made me very sleepy, very rarely get sleepy  when Jim is driving. We stopped at the KOA bought two packs of firewood. Jim's jonesing for a fire. When we pulled in Jim Carried our Sam's Club items inside. Our neighbor behind us was about to start a fire,  and I could see all he had was paper towels. I asked Jim to take some newspaper over to him, was surprised when he did they chatted for a minute, he  got  their son to call him Uncle Jimmy. It was two brothers and their child for some reason he likes that a lot. He doesn't have any to call him that. I went in helped him put stuff away and he went out and started a fire. I sat out with him for a little bit then I texted my son and  DIL, she always gets back to me right away. So she texted me and we had a nice chat with everyone on FaceTime. It was really nice to see and hear everyone. Don't think they miss us too much. I always say I'm a good mother in law I'm  never around. I went in around 9 our neighbor came over we gave the newspaper to and borrow two more pieces of wood. He said you know what I mean by borrow we would only have coals In  return. It was getting chilly so I went in watch some of my TV shows Jim came in probably after 10 he went to bed later than I thought he would after getting up so early. I went to bed late.