I woke up first this morning, I guess I did sleep well. Jim rolled over and said no not yet, I said no worries babe. I went downstairs and made the coffee, can't remember how much to put in, I didn't make it for a while. It was good but his is always better. Since we have the satellite hooked up and we changed our location I'm able to record The Today Show. So I started it over since it was on for an hour and a half already. Then I had a bowl of cereal and I made Jim eggs  and a muffin from yesterday's lunch. Then he went outside and got a bucket of soapy water and backed the truck up to the front nose of the FW and got his bug spray and washed the front nose of the RV, it was full of bugs. we each had a bowl of vegetable soup for the start of our lunch . Then he got the smoker going, we put on a chicken then took that off and grilled couple Burgers on it I had thawed out. We had a burger today and we will have a leftover one for tomorrow too. Then he had to get it hot again, then we added some boneless ribs, to get a little smoky flavor on them. 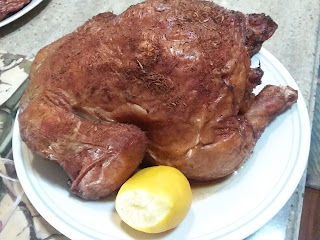 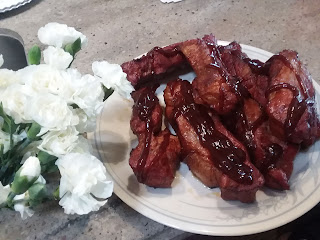 Tomorrow I will finish them off in the IP and we will have them for dinner tomorrow, as it is supposed to rain a little. It sounds like a lot of cooking, was about four hours .  Once you get the smoker going  we like to  get a lot of things done at once .  Saves a lot of time , and prepped later , so worth it . He received a call from a tax guy, made arrangements to get everything mailed in, happy we're getting a nice refund, that was great news. Since today is Friday we watched a few RVs Rolling On In, we got a new neighbor behind us. And some of the sites that are set up for the season, they also arrived. Then we went and played a round of miniature golf here. We have our own clubs and balls. 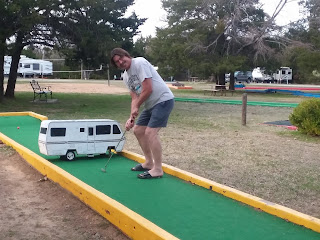 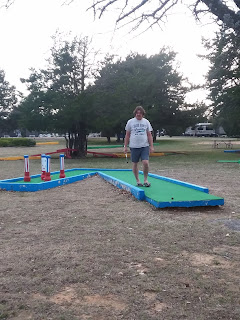 It was fun for some reason I felt like doing it. Jim says he won by one point. That's fine. Then we came back and he got his shoes on while I put the clothes away and went for a little walk around. Then we came back and were sitting outside. And our neighbor Regina came over she's in a motorhome towing a car all by yourself she is from Texas. She wanted to ask Jim about traveling to Pennsylvania worried about going over mountains. We said that's nothing compared to what they have out this way. We didn't come in till after 7:30 I made 4 salads we had one for dinner with some chicken on it. I will have one for tomorrow. Then I made a chocolate chip zucchini cake, I use Jim as my KitchenAid mixer, he is very good at that. Then we watched a little TV had a piece of cake oh, I took a shower and called it a wonderful day in the neighborhood.
Posted by Darlene at 5:09 AM