Jim woke up at 7:30 I got out of bed just after 8 a.m. . I wanted to watch Willie Geist on his Morning Show he has on Sunday. Don't know when it's on, apparently missed it. We had our wonderful coffee and shared a  really good oranges.  I made a smoothie for each of us. The Sun was shining so bright and warming it up, I started opening Windows and the door. I threw the sheets in the washer and got that going. Then I started to make fresh date nut balls with California dates, so much better than the dried-up ones they sell in Pennsylvania. But remembered I needed to buy unsweetened coconut to roll them in, so I put it on hold till we get home tonight. We bought a rotisserie chicken yesterday at Sam's and I took the rest of the meat off the bones and made a chicken casserole that is made in the microwave. I have had this recipe for a million years ,  since my mother and I took a microwave cooking class at Boscov's upstairs,  when microwaves first came out,  I've been making this. You just mix up the chicken with mayonnaise, cream of chicken or  celery soup whenever you have, a can of rinsed sliced water chestnuts, chop celery and onion mix a little  melted butter  with half box cornbread stuffing to coat it, you mix some in and then you put the rest on the top. Microwave for 20 minutes. We had that for an early lunch with steamed green beans. I mixed up a batch of the paleo chocolate chip cookies. We each had two cookies for dessert and will have one for travel day lunch tomorrow . Jim took a shower. We made the bed together , then I took a shower and we got ready and left for our adventure for the day. We drove to the Carlsbad Caverns. 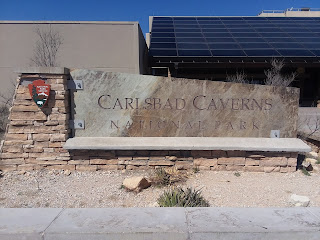 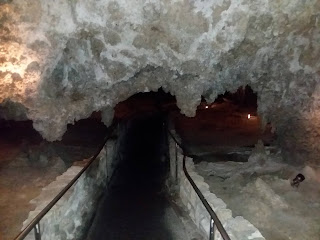 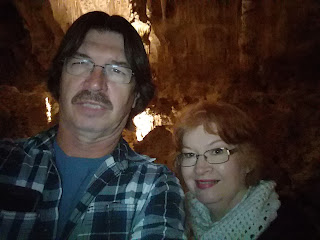 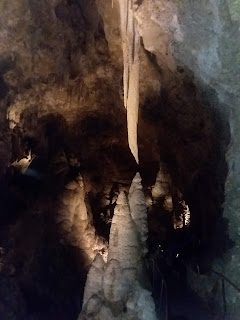 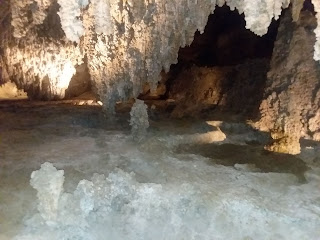 We we're going to walk down and take the elevator up. But it's busy the other way so we ended up taking the elevator down I think it was 70 stories, and then we walked back out.  IT was 750 feet in elevation. 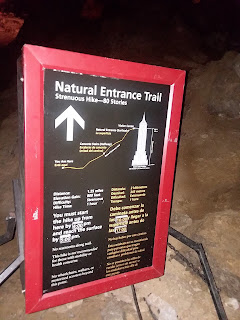 It was fascinating , we talked to a  Ranger coming out ,we were talking about how many people have a hard time and have to be carried out or get a wheelchair for them. He said some weeks they do it a few times and then we'll go weeks and weeks and not have anyone need the service. You have to whisper in the caverns because of the way the sound travels, was so loud if you didn't. So babies and small children wasn't good. There was a family that came out at the very end when we did. She was carrying a four month old baby earlier we seen her nursing I told her she should get an award for walking all the way out plus carrying  the baby,  she was huffing even worse than I was. That walk out was no joke. We saw two women that were walking out the same time we were, we kept passing each other. Once we were out in the open she was over at a plant and thought she was taking a picture of it, and she must have some kind of knife and she sliced off a piece of the plant and I heard her say doesn't look like aloe Vera. Couldn't believe she did that. It took us an hour to walk out. We probably walked over 4 miles. Walking uphill to get out 70 stories up was a nice challenge. When we could finally see the light of day  it's where the Batcave was and bats would come out at night,  and also  cave swallows . 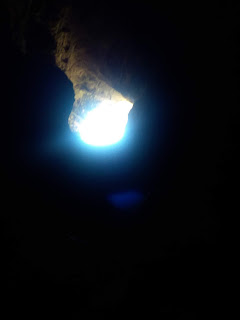 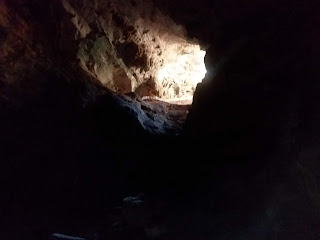 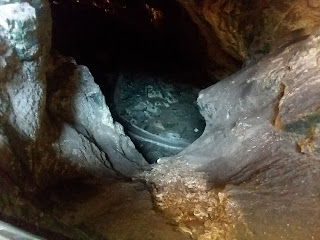 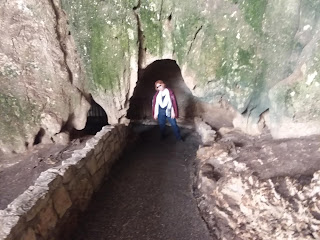 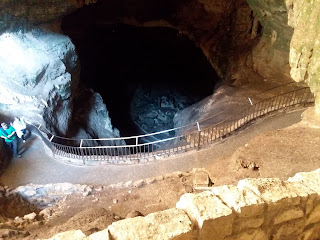 Once we saw the light we still had to walk really far to get over to the truck . After we left we couldn't  wait to get to the water  in the truck, really thirsty .  The cave is about 95% humidity,  which felt really weird after being in dry desert all this time. We then stopped in Albertsons grocery store because  I still have been looking for sunflower seeds and I needed the coconut to roll my date nut balls in. Jim filled up the water jugs while I went in the store. Then we stop to get diesel fuel. Jim went into Lowe's to find wood, but they didn't have any either. I told him Albertsons did but the line was so full I didn't even try to buy any, now I wish I would have. Well we drove back to the FW we could see a beautiful sunset. When we got back  I  grilled some chicken on my stove top Grill and I made some in the oven  too, called oven fried chicken and I made 4 salads we had one for dinner. I finished the date nut balls now that I had coconut. Jim couldn't  believe I was doing so much work after our long walk in the caverns.
Posted by Darlene at 6:29 AM