Spent some 'Time" in Dallas

Today we wanted to take a day trip into Dallas and get a early start. Jim was up for a beautiful sun rise. 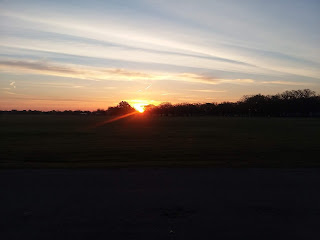 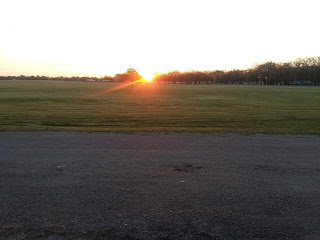 I was up shortly after Jim. My eye was so swollen up, and itching. I didn't even turn the TV on, it would have slowed me down. I almost did not even want to go, but I didn't say anything, did not want to be a party pooper. So I started to make chicken wraps to take for lunch. I took a dose of Benadryl, hoping it would take the swelling and itch out of my eye. We were ready and left by 9:15 a.m. then we had to decide where we were going to park and either have an Uber or take a bus into the city. We found a lovely shopping area not sure what it was called. Didn't seem like much of it was open yet very beautiful setting, with some lovely fountains, we walked around a little bit. 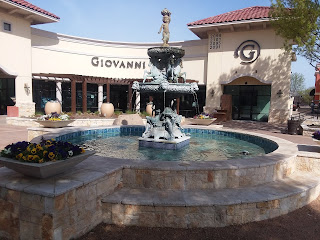 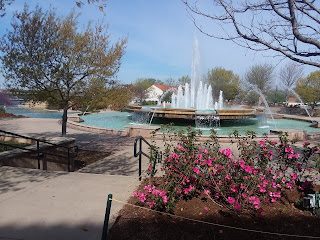 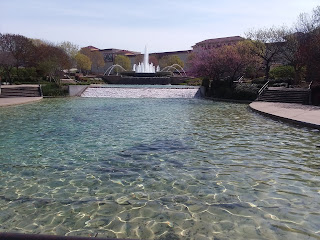 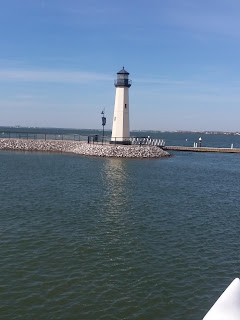 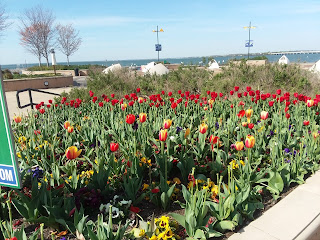 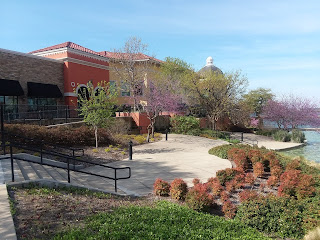 But the sign says 2-hour minimum parking. So we decided to drive a little closer and find somewhere else to park. Maybe at a bus station and take a bus in. I was so sleepy driving  after taking the Benadryl. We found the DART bus. He parked the truck way in the back, so not to be in anyone's way. Went inside to see what information we could find. We had no clue we've never done this before. There was a lovely lady inside, she was security but said she tries to help people out. She gave us a lot of information on what to do and not to do. First she suggested we move the truck closer so she could watch it. You have people come in with rollbacks and quick hitches and just pull cars out of there, never to be found again. So Jim moves truck closer. We talked with her a little bit more, found out some more information.  Like try not to go to the west side. Jim didn't have exact change it was only $3 a person to ride into the city. So she suggested you download the app when you can pay with his phone. So she helped him do that, we only had 35  minutes to wait till the bus came, at noon the rate was cheaper also. Which it took us that long to get everything situated. So the first driver came in. She told him we were new and didn't know where we were going. There's only a few of us that boarded the bus went into the city. The ride is about 20 minutes long, a lot of horn blowing going on. Crazy driving he would come up so close to the car in front of him, and pass frequently and gets so close to the car next to him oh, but he does it every day so all is well. Our next decision was where to get off the bus. I had a list of a few places we thought would be fun to stop. Wanted a nice park where we could eat our lunch. There is a statue of a cattle drive that we passed. A few people got off, a few people got on. Still didn't decide, bus driver never said a word. Before we knew it we could tell we were heading out of the city, and back to the bus station already. Then we had to decide what to do again as we drove along realizing we've missed our opportunity, I said to Jim what do you think. As usual he said whatever you want to do we can go back. So we sat in silence for a few minutes, I'm thinking I don't know if I want to do that drive two more times. So I asked him again, and then he finally honestly answered I'm cool if we don't go back again. We both laughed we thought it was so funny. I said maybe we're not really big city people. I thought Nashville was so much cooler does not seem as nearly as big. So we got off the bus laughing at ourselves. Such small country bumpkins we are today. Security guard lady saw us, she kind of laughed and didn't seem that shocked. We want to tell her that we were back so she knew that we are the ones that took the truck. She really said she would be watching it and we had to be back by 6 when she left. So we got back in the truck. How to figure out how to get out of the parking lot, had to back up again. Decided to go back to the lovely shopping area we originally parked in. After lunch in the truck. We went into a frozen yogurt shop. Which is one thing I can eat since it's no Dairy. So for 2 fro yo and $12 later. We sat on a bench overlooking the water to eat our treat. Then we got back in the truck headed back towards Quinlan. AGAIN I wad so tired. I wanted to stop and get my pills at Walmart, but the pharmacist told me they wouldn't be into after 4. By this time it was right before 3 or so. So  we can just run in and get it tomorrow. We headed back to the FW. We both had long pants on I was very warm out. So we both changed and I was so sleepy I lay down took about a good two-hour nap. It was wonderful,  so quiet, I didn't hear a peep out of Jim, I usually do. He said he sat outside for a while. The camper was very warm when we got in. I put the fans on that cools it off quickly. But it was nice to sleep in the warmth. Well my eye just driving me crazy, but the nap helped a lot. I was dreaming all kinds of crazy stuff, Benadryl is no joke. When I woke up,  we  watched a little news. I put some pork chops in the oven for dinner. After dinner Jim was watching hockey, yeah they won. He paused the game and we went for a little walk so we could see the sunset. 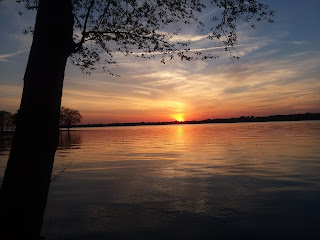 He came back to finish the game and I took another lap around the one backrow were not on yet. Watched a big motor home that come in later. When I came back we watched Survivor together that I had recorded earlier. I washed up the dishes Jim went to bed a little earlier. And with my Marathon nap I stayed up quite late, and watched The Voice. I was chatting with my brother a little bit Facebook. Was a very interesting day. Too funny that we took $6 bus ride through the city and right back out again, really cracks us up. I guess my first thought in the morning when I kind of didn't want to go really panned out.
Posted by Darlene at 8:01 AM