Decisions Made, we have a plan

I went to bed a little late last night, I started making Jim a bag to hold the pads for landing gear. I had bags everywhere made the camper a mess. So Jim was up first this morning, made coffee and I got up right after that. So we had a big decision to make. We have reservations for Las Vegas, we have two shows we booked to see from March 5th to the 8th. The big problem was we were supposed to leave today at this KOA that's so beautiful with all the fruit trees, we had nowhere booked to go in between now and then. He spent a lot of time yesterday looking online to find a place, to no avail. So this a.m. after we had a muffin with our coffee. Yesterday I made 6 blueberry and 6 chocolate chip muffins. We walked up again to see if we could register for another night or two here. We were up there before 9ish. So the lady at the desk told us we can stay one more night but we have to move to a different site. Which normally is a pain but the last site we had for the last two nights was the closest to the road and gate and a guy next to us with three barking dogs. And yesterday he walked behind our camper with one dog, Jim was under the front cap and heard him, which he shouldn't be under there, and he looked up quick and banged his head till it bled. So we were fine with moving more Inland of the campground where we were before. So we got a new site number 1601. While he was getting ready outside I called the RV Resort in Las Vegas and asked if we could arrived two days earlier. She was very hard to understand had to keep repeating what I thought I heard her say we wanted to add a day on the end too, but we would have had to move on the last day for only one night,  so I just decided we would take the two days early. And hopefully that would ease Jim's anxiety. We moved around 10:30ish a.m. as usual Jim did a wonderful job backing in to our site, our neighbors were sitting out so they had a nice view of his expertise. We talked to them for a bit, one of the first things he mentioned was how wonderful and easy he backed in this huge thing. So now tomorrow we will be leaving and I think now he found a Walmart we can stay in between here and Vegas, Boondock for one night and then arrive at the Las Vegas Resort on the 2nd to the 8th. We did our minimal set up I saw a recipe on my phone last night for potato soup. So once we were situated I got out my instant pot end made potato soup but instead I did cream chicken corn chowder, No cream, So we had the soup for lunch and then we sat outside Jim loves watching the F-18 fighter jets flying here they do Dives and Spins and turns they're little loud but really fun to watch, getting ready for an airshow this weekend we heard. After picking all the fresh fruit I got out my blender and made a lemonade and ice drink really good.and the door still open. 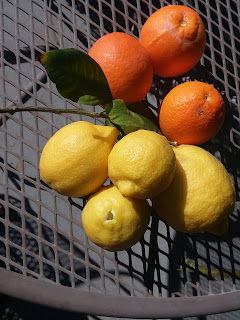 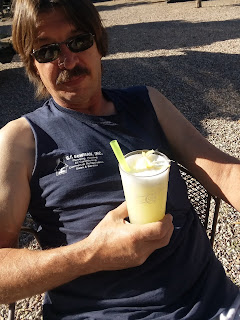 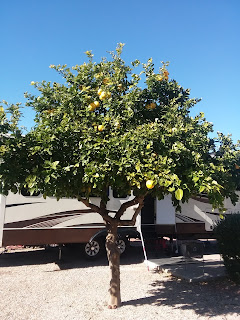 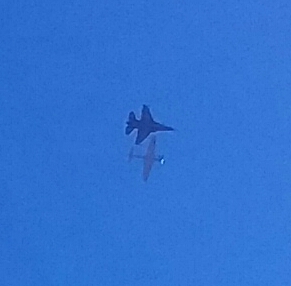 Then we got ready and went down to the pool / hot tub talk to some people about our adventures where we're going next. Continue to watch the airshow. Then we came back and changed and locked up the camper and went up to the BBQ and Rush restaurant we had an awesome pork barbecue coleslaw potato salad, Jim had brisket sandwich baked beans and French fries, so good. 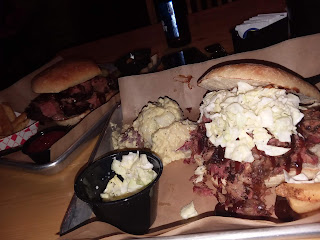 Then a  game of trivia broke out, is the activity they played five games 10 questions each we played three lost miserably had cool prizes though. We got the first one 2 out of 10 and then the next two we had four out of 10 wrong. Then we walk back, really warm evening,. was pretty warm out, 8:00 at night
Posted by Darlene at 10:15 AM