Another travel day, made a smoothie and wraps for lunch later. We left at 9:45, it's always later than Jim wants to leave. We kept watching the clouds there was light rain on and off and few times it was heavy. There's clouds and blue sky on the right side and on Jim's side Wicked looking clouds. 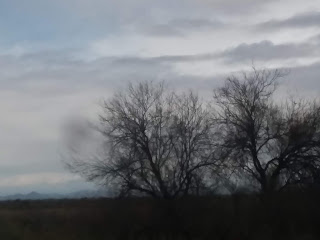 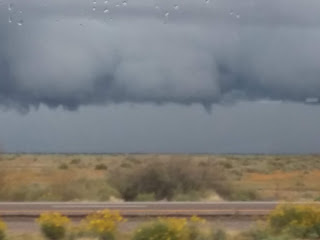 We stopped for lunch at a rest area. He drove a total of 240 miles today. We arrived at the KOA here in Benson area. Our site was so muddy so I walked over and asked him if we could move to a dryer one, he would have to walk through a lot of mud to unhook. 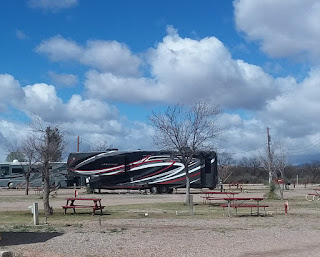 Jim hooked up to their cable instead of messing with the satellite. When we watched  local news from Tucson they showed Flagstaff where we were yesterday, and all the snow they had received only letting cars through with chains or four-wheel drive. While we were watching the news my phone rang and it was Albuquerque KOA they wanted to know if we were going to be there before 6. During our prep yesterday for travel Jim was trying to find it, he had written it down and he said he only wrote down the ones he had actually made reservations for. Anyway I said that one got by us and they actually told us they refund the money, which they did already. Which was very nice of them. It was a good thing Jim could not find the email confirmation, because we would have had to climb that big mountain again with the high elevation,  and that's where the snow was and I really wanted to skip all that. I was  texting  our friend Sally and Bob  they are in Texas right now .  I accidentally called her, quick hung up and then she called me back , we had a nice little chat . Figured out we were both going to be  in Nashville Tennessee a day apart,  so we said we would change our schedules and come in a day or two early  so we could spend the day in Nashville together before our other friends come in from Pa. We said goodbye for now.  Then I served us dinner next, first we had a salad, and made  one for the next day too, I usually  make four at a time.  We had soup I just made in the instant pot, cream of chicken corn chowder, no bacon this time. Then we had an open-faced turkey burger and  chocolate chip  zucchini  cake, that I had taken out of the freezer yesterday, for dessert. With all the rain we had a beautiful rainbow out our back window. We called it a night.