For some reason I could not sleep last night. I was in bed from 11:30 to 1. Finally got up and read some of my RV blogs, went back to bed. Jim was up first this morning, I reluctantly got up anyway. I made us both oatmeal with cherry topping. Sounds weird, but I had a little left over from previous desserts, very good, no added sweeteners except a pack of stevia. We watched  some of the Today Show. Then somehow we got motivated to do some household chores. Jim went outside and cleaned out his hole, as we call it. I wish I had a before and after. He cleaned it also not just straightened it out. Used the torque wrench and did all the RV tires , and check the air and filled all 10 ,  truck, RV. He got a bucket of soapy water and wash the back window so we could see out. Then he took the electric heaters out , we have a little one in the bathroom a small one in the middle of the RV,  and he also pulled the  electric fireplace out, which is in the back, carefully brought it outside  and while the air compressor was out he blew all the dust and dirt out of all three. They don't sell firewood here, when we checked in the lady told Jim pick up whatever is dead laying around. So he took the truck and went for a firewood run, that was later.  Brought back a lot of Twigs that were great for kindling. Meanwhile back inside, I got out the vacuum  and vacuumed  the RV. Jim helped me  vacuum, dust the high spots  of the Cabinetry,  both pantry and fridge where I can't reach . Washed a load of cleaning towels that have been accumulating for a while. I picked up all the rugs, Jim shook them outside for me, and I wiped all the hard floors down. Then we got ready and went to town to look around. It was a little drive to get there, Jim said there was towns closer. We are very close to Oklahoma apparently. Would love to pop in and say hi to Blake Shelton. Funny story, as I'm sitting outside with Jim, doing a blog post from a day and a half ago, which doesn't seem like that long. He decided to read from a few days earlier, right before you post it. And apparently he said I have it all messed up. We went to different KOA in a row and apparently I mix them up, OMG. Now he's trying to fix it. So back to our adventure, we found at Sam's Club but decided not to waste a beautiful day walking around, which we really didn't need much in there. Every restaurant you can imagine is around, we found a Cracker Barrel, have not been in one for a long time. The only time we would really go to one was when we were on holiday. We sat right in front of the fireplace, was beautiful, asked the waitress if he could throw more wood on the fire, as it burned down a little. She said oh it needs wood, and immediately went and got four pieces and threw it in, I wish Jim could have done it. 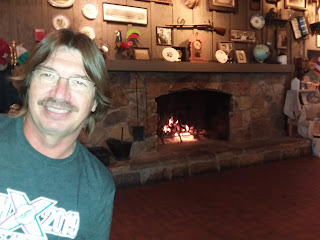 I had catfish & hush puppies, coleslaw, sweet potato casserole. Jim had country fried steak, pinto beans, corn , hash brown casserole , we also had the biscuits and cornbread, I took one biscuit home for Jim's breakfast tomorrow morning. I'm not even going to mention how many carbohydrates that was. For dessert we shared a piece of buttermilk pie, which I make, but did not for a long time. It was a very large piece, very similar to mine, mine is more lemony. Very good though garnished with topping and strawberries. It was a wonderful meal we left very full and satisfied. Really enjoy the fire burning. I love the gift shop I could have walked around for an hour, Jim not so much. I love the clothes in there, would have loved to get a summary flowing top. But they're kind of pricey. Found out they do have a sale rack for seasonal items. Wish I could have found that and looked longer. Jim's just not into it. Then we went into Walmart, per usual, wanted to shop somewhere else, but we ended up there. When we got back to the FW it was so beautiful out. I put all the food away. Jim actually took the truck now and went and got all the wood, I talked about earlier. Then we went for a little walk,  almost an hour and picked up 4 big chunks of wood for later. I made vegetable soup in the IP, with turkey sausage and added unfried chicken later at the end. I also made 10 hard-boiled eggs, in the IP first. Jim made a fire with all the wood he collected throughout the day. 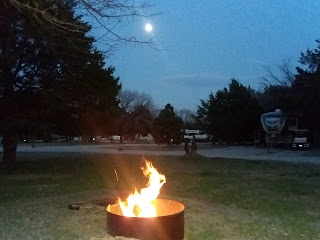 We sat outside and had a bowl of the soup I made, that was plenty for dinner since we had such a large wonderful lunch. Just wanted to watch a hockey game so he did on his outside TV, 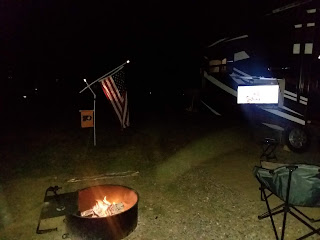 which is wonderful for me. I was able to watch some of my shows that he hates and get my DVR closer to 50% full, which is always the goal. Yeah the Flyers won, when the game was over and all the wood was burned, Jim came in I turned off the show I was watching. We watched one that I recorded earlier we both like, we watch that together and then he went to bed. I went to bed shortly after that, hoping I sleep better tonight. I'm sure I will in this beautiful large wonderful sight, feel so much like home, well it is. Wherever we roam, we're always at home!
Posted by Darlene at 4:57 AM