Sadly today we had to leave KOA / Lazydays Campground. Was truly a really wonderful place. I made smoothies and some eggs and bacon for breakfast. We pulled out at 9:30 a.m. heading towards Las Vegas. We stopped at a truck stop  to have a quick lunch. Jim's phone kept ringing he didn't know who it was. When I said I think they left a message. And he said it was MIA so we called her back and talk to her for a little bit, oh you're so darn cute on the phone. Sounds like the only one who misses us. When we stopped for fuel we pulled in there was a car in front of us. A girl standing at the passenger door was trying to put on a belt looks like it was made from CDs. In this guy came out I'm finished pumping the gas. And then they all went inside the gas station while we're sitting right behind them waiting to fuel up. And then she came out they had no keys so she couldn't get in looked at us and went back in. And then later her and another guy came back out got my car started kissing. And then they waited for the other two guys that were with him to come out the whole time we're waiting behind them to fuel up. A first Jim started getting mad. No I said it's all good just smile no problem no rush. And then they came out and just sat there waiting for the other guys, oh I was really getting ticked off. It was just so blatantly rude but they wouldn't move. There's nowhere else we could go Jim is on the end of the pumping row. Anyway fuel was cheap so when we finally got out of there and got back on the road we were heading towards Walmart to Boondock. When we finally got there the Walmart was packed full of RVs. Without to many issues, we got parked. I want to do a little food shopping and get something to make for dinner, I took my list and went into the store alone. Some guy I started talking to Jim right before I went in. I got my shopping list and went in. Before I went to check out I went over and asked this greeter that was at the door if it was okay to stay the night and she said NO not really. So I'm thinking oh crap,  there's a lot of RVs out there, and she's like I know but they're not supposed to be. Over at the courtesy desk we had a big yellow sign she pointed out to me that said no overnight parking sorry for the inconvenience. I asked her where we could go and she said there was a casino right up the road which I forgot Jim already knew about.  I texted Jim that we had to move up to the casino and that I was on my way out. He helped me get everything inside. I put all the items in that needed to go in the fridge and freezer. Put the rest by the door. I was glad he didn't have the camper leveled and the generator cord out,  but he said the guy talked to him for so long, he  never got it done which was good. We moved right up the road to the casino. Right out by the road there was just Barren land a whole bunch of RVs were parked in, but the sign said you needed a permit to park there. So we drove back the road in towards the casino and again a lot of RVs in there. The parking lot was very unlevel,  but we drove in made a big circle around and found a place to park. Then we went for a walk all around to look at the parking lot to see if there was any place better to move, we went inside the casino and looked around, really nice  hotel in here also was just too Smokey for me and we didn't stay in very long. Since it was so unlevel  Jim pretty much had to unhook the truck and then level it which worked out okay. Then he moved the truck to the side of FW, made it closer to plug in the generator. Again the batteries did great. Jim plug the generator in I put the slides out, started making dinner. We actually sat outside to eat it was pretty warm in the camper but comfortable. Then I came in to clean up the dishes, wanted to add up some numbers from February to see how we did. I crochet a little had the TV on took a shower. While I was doing that, Jim walked inside the casino to look around a little bit. I told him not to gamble away the rent money. I'm so glad we moved down to the casino it's so much more comfortable and nicer here. Beautiful views all around us. We don't have cars whizzing by us like we did over there. Turned out to be a really nice travel day, and great place to park, as we say The Price is Right. 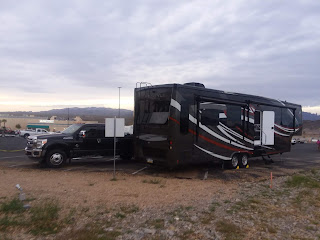 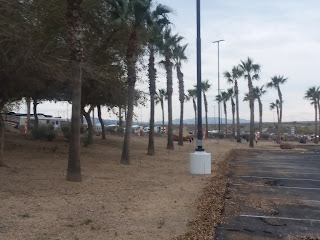 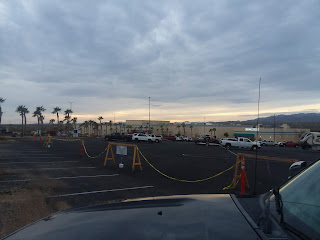 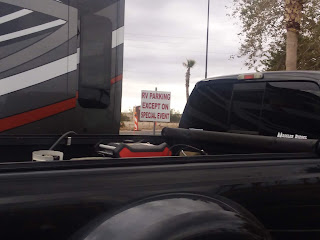 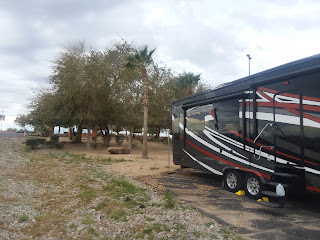 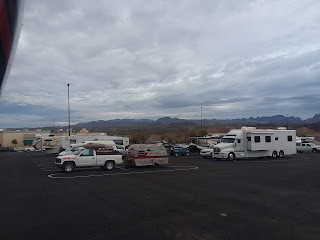 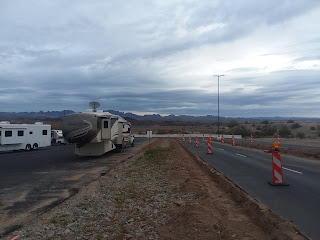 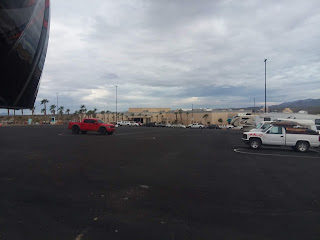