We both woke up today hearing Jim's phone ring, he forgot to turn it off last night. Then we realized we both heard the generators running already off in the distance. So at least we weren't the first one. After our morning routine ritual we watched as it got so sunny  out, beautiful morning. He went out for a little walk and swept the dirt / sand off  our rug as best he could. I finished the Today Show and got dressed then we went out and about to see what was going on. Jim went out to lunch with some people at a restaurant with Jersey Subs. I had lunch in the FW turned the generator off. Then  I went to something that was organized by a member called Stitch and bitch, was really just talking and everybody brought their projects, and we all got to talk and see what everyone was working on,  it was about 25 people there , even at least three men . This afternoon they had a woman that talked about how she got into renovating RVs. She was telling her story about how she had roommates, and her dad was ill and she had to take over his two businesses, had very little money, out of necessity was forced to move into a FW, almost homeless. So she bought a fifth wheel, but had nothing to pull it with. She was living in it and decided she wanted to renovate it. Now she buys used Montana's mainly and renovates them and sells them. She had a slideshow with before and afters, she loves to paint all the cabinets white. She was doing a beautiful job very interesting to listen to. She had a fifth-wheel there that she was living in that she was almost finished  renovating, that she had open that everyone could walk through and look at. Then I walked back to the fifth wheel with Jim and started making the macaroni and cheese for tonight. We went down then and 16 tables set up full of macaroni and cheese with a total of 104 different ones. 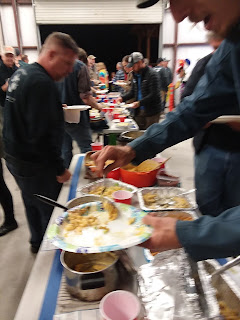 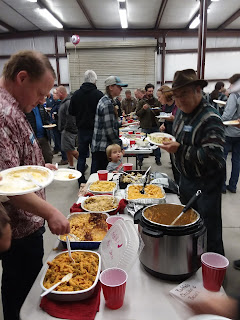 So we all had a tasting of each one I didn't make it to all of them. Then you got to vote on the best one, which was pretty much an impossible thing to figure out. Marcia won, she was one of the people we were talking to a lot. She put cauliflower in her mac and cheese . Everyone also brought their favorite beer and or wine or root beer to taste. Jim brought lager beer to taste. 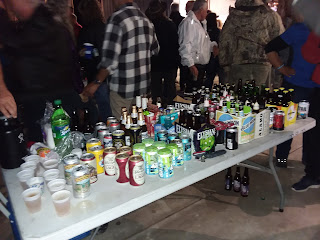 Every time I couldn't find him I remembered oh yeah he's over by the beer. They made a big campfire, I came home about 8. I wanted to clean up and watch This Is Us from last night. Jim came back about halfway through I finished the show cleaned up  the dishes. Then we turn the generator off at 10 he went to bed first and I did shortly after.
Posted by Darlene at 7:17 AM