Jim was up early as always on travel day. Weather prediction was for a lot of rain. I reminded him that our schedule is flexible, and we could stay another day if we wanted to. We discussed it and ultimately decided to leave this morning. We had a smoothie, and right before we left we ate some of the deviled eggs that I had made for New Year's party for breakfast. It continued to rain on and off, heavy at times. We left around 10  or 10:30. Still raining every time we mentioned that it lightened up it started pouring harder. After about a good hour or so we stopped at the first rest area that we saw, there not as well marked and not sure when the next one was. We did our thing, and grabbed some  lunch meat and cheese, shared an apple. We drove for a while we were following I-10. We missed the turn off for the road it wanted us to take. And with a little recalculating and stress, we found our way around, he is really good at that. First we saw huge hills, guess we're in the Hill Country of Texas now. Good thing was we saw signs for Thousand Trails, the first one was 11 miles away. As light rain continued to fall. But the road started to climb, an S turn after S turn. OMG. With a little white knuckling, and silence we arrived safely. We went in to register and told them what a fun drive rhat was, and they said welcome, and I said thank you but we may never come back here again, LOL who knows, whatever. She told us what sites are available, we drove around picked one that was a little more Woods that we would have liked. We saw deer everywhere. I asked him how long are we going to continue to take pictures of them , 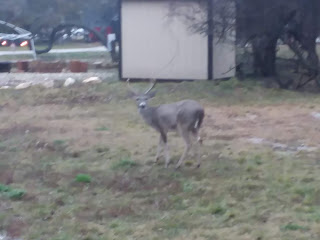 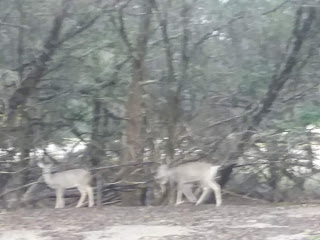 they never seem to  turn out very well . It was nice to be stopped and situated. We set up and I heated up some leftovers for a later lunch edition. And then we went out to get spring water which we were out of, and we needed a bolt or two to fix the steps and some parts for the water softener. We went to a little grocery store but only bought water. Filled up the truck with diesel and they had a water kiosk, so we filled up our other jugs too. We got back and it was still a lot of daylight left, especially when you come out of the woods, we drove around, it's quite a large place. It has 260 Acres  and 387 campsites. We saw a lot of deer as we drove around then we started to see some big bucks with some large racks and apparently we're still taking pictures of them. We got back to the fifth wheel, Jim fixed the rivet in the folding steps, and fixed the water softener and hooked up the water , they said it smelled like sulfur so we didn't want to put it on without it, doesn't seem to be too bad. and I heated up dinner got some more things out of the freezer for tomorrow we tried to get some TV, not very good here. It was nice to finally relax I went to bed about a half an hour after Jim.
Posted by Darlene at 4:10 PM