I decided to start labeling with a date and where we are, which goes at the bottom just to help keep  track, that is if I can remember. We got up early if you're in California, we got up late, if you're in Pennsylvania. We were used to getting up at 5 a.m. for work in Pennsylvania, we have to get up here at 2 to keep it the same. I guess I should stop talking about that. Today I remembered  to make a smoothie, as breakfast was almost ready, we got our Greens in first, I made fried potatoes eggs and apple maple sausage. Small portion especially for me. Watched The Today Show. Then me went for a big bike ride,  we actually rode every road twice. Which probably took around an hour. We finally met the other people from Pennsylvania, his name is Allen. They were from Milford. Had a nice chat. We finished our bike ride. And then we started grilling the meat we bought yesterday. I had thawed out a steak so Jim grilled it For lunch and me a piece of chicken. I had it on salad, when we were  finished eating we grilled the rest of the chicken. And then two turkey burgers for me and two beef burgers for him. While all that was going on I started the instant pot with vegetable soup. I put in every vegetable I could find, mostly fresh a few frozen. Then later I added some of the grilled chicken, good way to get in your veggies for the day. Everybody kept walking by and saying it smelled good. Then we were finished we probably were grilling for an hour. We sat outside the weather was so perfect Jim still can't get over why we don't live here LOL. We sat outside in the sun, was just beautiful, blue skies no clouds, hardly any wind. We are near the airport so we keep seeing planes going over all the time which I love to watch them. Always did, even as a kid, love to watch planes. We sat outside and talked, and talked to neighbors walking by. Keep talking about going into the pool, sounds like I will be but probably alone. Because somebody doesn't want to go in. I did end up going into the pool alone. To many kids around. The pool and hot tub was so nice. 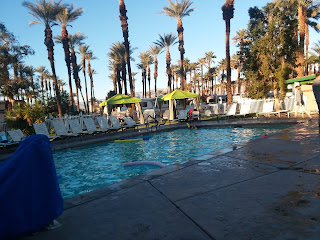 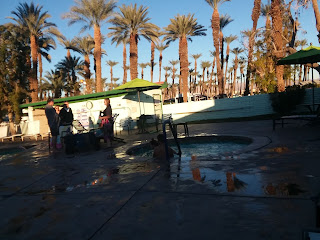 It is very drying on the skin with as dry as it is here. I did not stay in very long. Went back after I changed, I'm sure Jim missed me. He had a few beers in by then. We had a bite to eat, took showers, and watched TV. I bed to bed first.
Posted by Darlene at 7:12 PM