Fun with our 500 new best friends

When Jim got up this morning to turn the generator on, the camper felt warm we had the furnace on all night but there was not enough power to keep the fridge  going, because the clock was off too, the Fridge was 46 I think. I have to get the outside freezer cleaned out today and emptied. And turned off. Once we got everything up and running I made breakfast,  Paleo pumpkin pancakes eggs and one piece of bacon each. We watch some of the morning news and time went so fast we went down to the activity area this morning at 10, it was welcome newbies. As we were all talking you could see the dog people all walking back with their dogs. They did a short talk on boondocking and gave some  tips, most of which I think we do already. Then there was a talk on how to do a Blog which was very interesting it was done by Alyssa and Heath. I did that by myself Jim was back at the RV and doing whatever, so I walked back to him and then we walk down they were doing a bloody Mary potluck if you want to call it that. 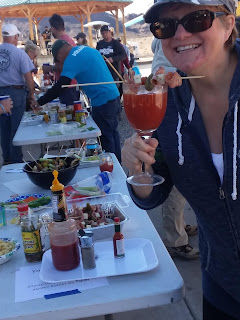 They have the tomato juice and everybody brought vodka and garnishes. I walked back and got Jim a cup he had a little tiny vodka bottle, here's a funny picture with another guy that had huge vodka bottle. 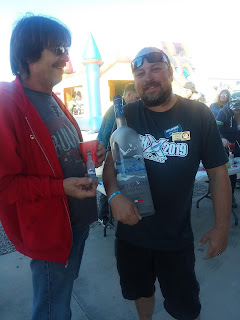 He had two, and we walked around and talked to some lovely people and they suggested that tonight was party at your own rig to invite someone over for dinner or whatever. I was  talking to this lady that does Nails it's kind of like a decal, Marsha and Jeff, and we invited them to dinner, well I did. They had a bounce houses too,  one for kids and one for adults. A lot of Dobermans here, Jim had fun petting all of them. I saw a guy go by that was washing rigs so I told Jim to go find him, which eventually did. He was washing a van so we asked and he said he would come up and do ours. We had a month of road dirt on which it looks so bad. Then we cleaned out the freezer in the front hole,  took everything out  put it in the inside freezer  and  unplugged it .  Tomorrow we have to wipe it out prop the door open .  Then we tried to go for a walk but would  get a couple sites away and then talk to other people, and then tried to walk again and talk to more people. By then the camper was almost finished there's five people on it they did a really great job. It was $100 to wash 43 ft. and they also start with the roof and wiped it all down. They use treated water so there's no spots. Then we finally went for a long walk until Jim's back started hurting, then we came back and started getting ready for our dinner with our new friends. They had a table and chairs I was afraid the ground will be wet from washing the rig, so instead of dragging it down here I said why don't they just keep it there and we'll bring our food to them, so that's what we did. They walked over to us and helped us carry our bench and the food I made, to outside their fifth wheel, really nice dinner. I heated the  sliced up  smoked pork loin we did yesterday I have some slider buns, I made mashed potatoes with spinach bacon onion and cheese, I got some applesauce out of the freezer, that I defrosted, I made some green beans and a paleo chocolate chip cookie for each of us, she has some Brussel sprouts that she roasted and strawberries and pineapple. After dinner we cleaned up and walk down to where they had a huge fire pit and talked around the fire. 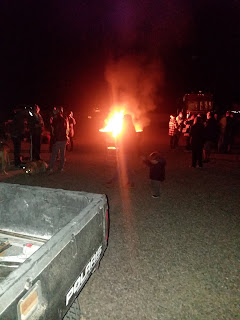 We kept mingling and talking to different people, got invited to this party where they had a whole bunch of food and drinks for all the new people. That was fun and very nice of them. Then  me went back to the fire. We walked back so Jim could get more beer and then I stayed here  then he went back to the party. I took a super quick shower, was watching a little TV. Then I had to go out and turn the generator off. Worked on the blog about to go to bed and Jim is still out partying.
Posted by Darlene at 9:30 AM

Email ThisBlogThis!Share to TwitterShare to FacebookShare to Pinterest
Labels: Day #2