A day in Tombstone AZ

As George Strait said we're not here for a long time we're here for a good time. Jim was up first made the coffee and I got up and made us a smoothie, we watch some Today Show. The weatherman said  we would have the weather Envy of the country today. We got ready for our day trip to Tombstone. Upon arrival first we rode the stagecoach. 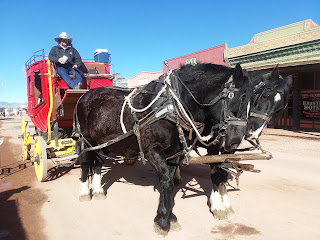 I told the stage coach driver I really wanted his job, looks like so much fun, he wanted to give it to me immediately, because he was having some health issues and was having pain.  I wish I could have done that. Then after that we went for lunch someone here at the campground told us to go to a  restaurant  called Big Nose Kate Saloon. You can read a clip that was on the menu about her. The food was really good, and there was a guy singing Country songs and he sang The George Strait song that I mentioned in the beginning. 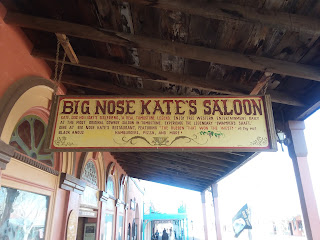 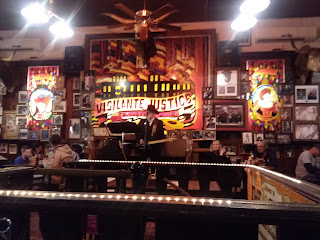 We walked around a whole bunch of gift shops and stores a lot of Western Wear, hard to resist. We went to a gunfight that was comedy based. Then we went back to the truck got a soda and a protein bar and put on our western boots and hat, now we fit in. Then we also went to a reenactment at the O.K. Correl with Wyatt Earp and Doc Holliday. 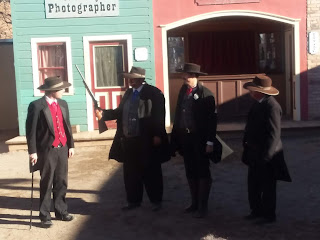 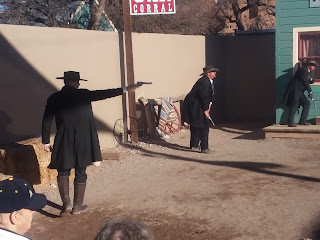 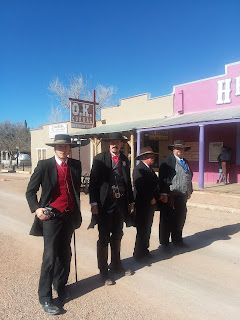 Then the guy that played a bad guy in The Comedy drove the trolley for the tour and we did that too. It was a lot of fun and beautiful day. 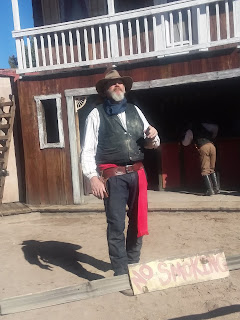 Jim just said I took 159 pictures today, WOW. Then we stopped at Boothill graveyard, it has the graves of the famous gunfighters, the ones that were killed at the O.K. Corral. 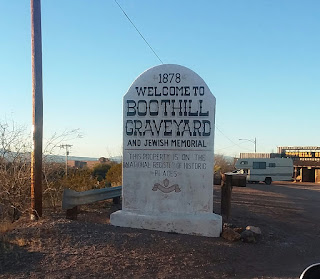 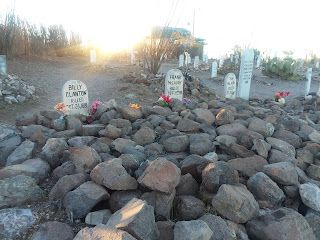 I was here 45 years ago with my family and cousins. I have the same picture  from then, I wanted to show a then and now,  but I can't find it ,  how can you lose something in 43 ft .  I think it's at my MIL storage shed . Then we drove back to the camper, it's only 23 miles away, enjoying the drive as the sun was starting to set. We got back and I had  some tuna steaks so we grilled those outside and had our leftover zucchini and vegetables. I made a couple paleo chocolate chip cookies we watched a little TV took the trash out, took showers and went to bed.
Posted by Darlene at 8:57 AM