Second time on this trip the FW was in a different State then us.

Good morning Arizona. When Jim gets up it's usually about 7:30. He puts on the generator of course. I made him eggs for breakfast, and we did our normal morning routine. We talked about planning our day. We decided to take a drive into Lake Havasu. We also wanted to get gas for the generator. We used a good five gallons I guess in about two and a half days. We drove around a little and looked at the nice houses I love the style in the Southwest. We went down to where the London Bridges. Walked around a little went to some gift shops. 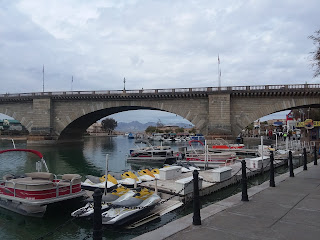 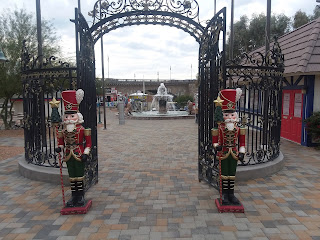 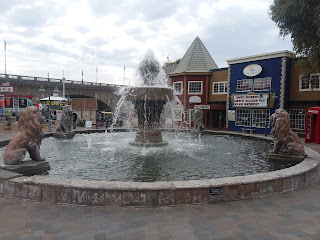 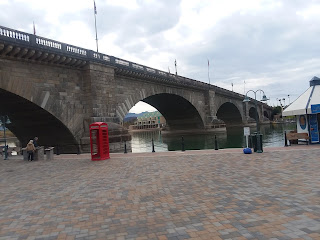 There was a man in there that told us we can take a boat ride  across the island and go over to the casino which is in California, for $2.00 a person, can't beat that. Went to the visitor center there was a lovely lady that was giving out brochures and telling you of the activities, in the area. We had to move the truck, and then we bought our tickets. The boat ride was really nice it was a good twenty-minute ride. It was nice seeing all the campgrounds that are right on the water and a beautiful homes and all the boats that were docked right there. We went into a casino that was right there it was really Smokey but the restaurant wasn't as bad, so we went in there. Had a bite to eat it  looked over the water, and then we boarded the boat again for the ride back. 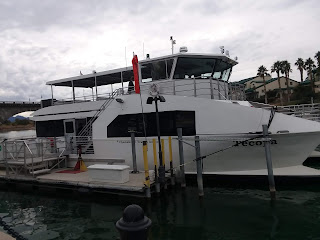 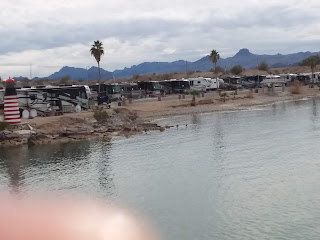 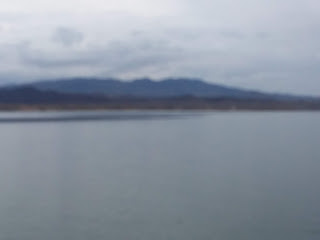 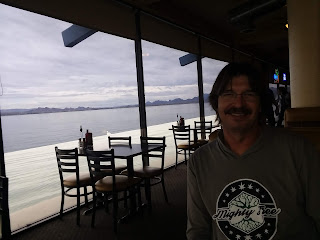 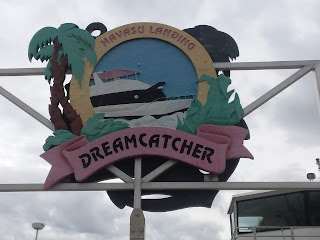 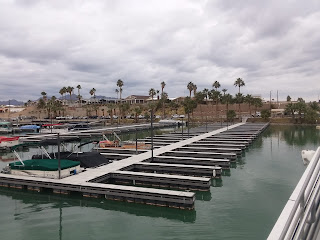 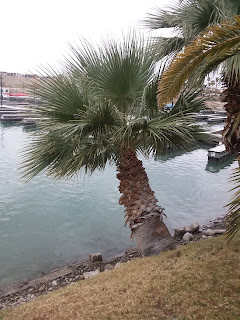 When we were just about there I was watching this motorhome go up the hill and all of a sudden it was shaking like crazy, I thought it was going to tip over. I actually gasped, so when we were off the boat we walked up past where he was and he actually was stuck in the soft dirt, and trying to dig out with a shovel. You can tell there was no way he was going to get out without getting pulled out, ask us how we know. We were going to wash the truck since we have the camper washed now, but decided to wait and do it right before we leave, because we heard there's some rain on the way. When we got back we got ourselves situated and then had a light dinner of leftovers. And then we went down for the margarita party. There was a line where everybody made Margaritas, if you had a special recipe that you felt was exceptional. Jim must have tasted about 25 at least. One lady was from Alaska and brought frozen blueberries that she picked on her own property, she actually won as the favorite margarita. Then there was a couple who played guitar and sang. They were really good their names were Kyle and Olivia they were adorable he had the most beautiful teeth and smile I've seen in a long time. 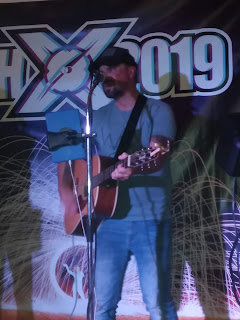 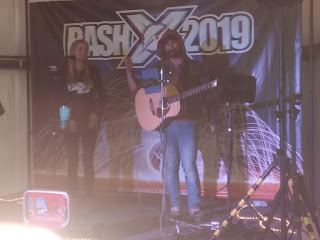 They have a small camper that says Drivin and Vibin on the back of it and we remember passing it on the highway on the way here. We kept thinking somebody had to be coming here and going in this direction. Everyone tried to get them to play longer but when they were finished they had a big campfire and we were over there for a while talking to a lot of different people. When we finally got home and put the generator back on again oh, I guess it actually ran for a  while we were down there. We turned the heat off last night to see if it would make a difference and keep the fridge running longer, I don't think it helped much. It was a wonderful evening.
Posted by Darlene at 8:09 AM

Email ThisBlogThis!Share to TwitterShare to FacebookShare to Pinterest
Labels: Lake Havasu to California Casino by boat