Jim was up early this morning, because it's time to go get the batteries. So I finally got up we had our coffee, and I got ready to leave. We decided to go to IHOP for breakfast first. Yesterday was National blueberry day so they kept advertising IHOP yesterday on the news, which is why I made the Crepes to use up my strawberries, but now we're going to go and save us some time. We didn't save that much time because it wasn't quite where he remembered it to be, so we had to make a big loop around. The place was pretty empty but we had a nice breakfast Jim had breakfast meat and eggs and four pancakes, I had one stuffed French toast and a veggie omelet, I took half of it home. It was  such a nice beautiful drive we got to the Battery Place picked up our, three new AGM batteries, and Jim needed another wire he cut him a piece about a foot long and the ends he needed and when we went to pay him he said  No  I think I can give you this for free since you spent do much money, which is really nice. Jim said the wire probably cost $5 a foot, nice to see some good customer service. Then we came home and I wanted to go up to the stitching session they have every day from 10 to 12. I got up there at 10:30 but there was nobody around. So I ended up watching Rachael Ray crocheted a little not too many people around to talk with. I texted Jim to text me back when he was finished he never did. I came back for lunch, and he wasn't there, and the door was locked. I thought it was a test because he changed the combination to the door and keeps using the old one, and forgetting, so I thought he was testing me because I told him I thought I would remember, BUT I didn't I was laughing when I went in but he wasn't in there. Turns out he went to the dumpster to throw all the boxes away from the batteries. 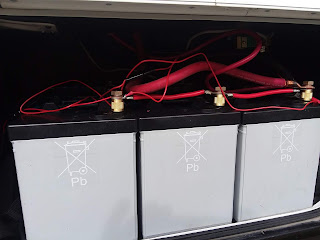 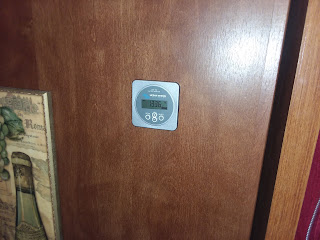 So we had a very light lunch since we had a big breakfast. Then we went for a little bike ride, we took a lap on every road. Came back sat outside a little bit,  Hockey was about to start he was going to put on his outside TV again. I started to prep for dinner we were going to have grilled tuna steaks, hush puppies, leftover grilled vegetables and some other microwave steamed vegetables. For dessert I made a Paleo chocolate mug cake with almond butter and the rest of my strawberries on the side wish I would have had topping but I was out but it's all my grocery list. So I went for a walk and walked every Road. When I got back to put the grill on. I fried off the hush puppies, put the veggies in the microwave went out and grilled the tuna. I took a photo of our dinner 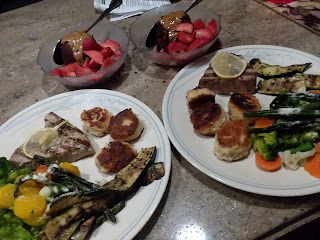 and this was the view we had while we ate outside of course with the hockey TV on. 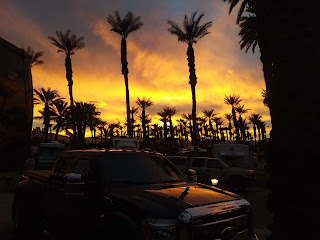 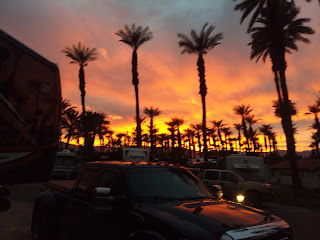 Jim finished watching hockey, I did the dishes and then I went up to the pool Again, by myself looking for someone else to talk to. Came back took a shower and watched a little TV. Just another fun day, doing real life stuff and Living the Dream.
Posted by Darlene at 7:51 PM

Email ThisBlogThis!Share to TwitterShare to FacebookShare to Pinterest
Labels: Tuesday 1-29-2019