Yea, we see the SUN

Wow, January 3, 2019 already, where has the time gone. The time change really has me messed up, either I'm getting up really late on our old time or early on the new time. And it's about to change again so it will be even worse. I'm trying just to ignore it because, it really doesn't matter what time it is. Jim's up first even though it doesn't matter. He made the coffee, I made breakfast I had sausage patties eggs and I made paleo blueberry pancakes. Then we started to do little projects that we wanted to get done. He got the satellite going. He torqued all the wheels, he started to do it every time we stop before we leave again because of the problem we had with our wheel. We super glued a light back together that had broken, and he put a new knob on the newest table that we bought for between our chairs, and tried to stabilize it a little more, it's a little shaky. I did three loads of laundry and still want to put the tree away. Then we went for a really long walk it was windy but in the sun it was really warm. We saw a lot of deer still taking pictures. 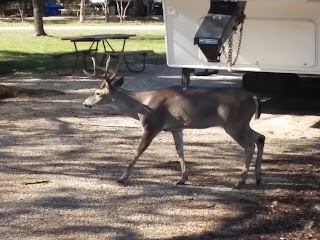 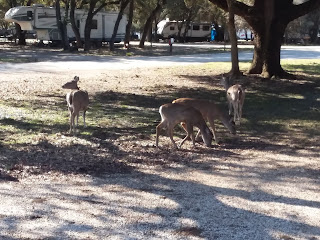 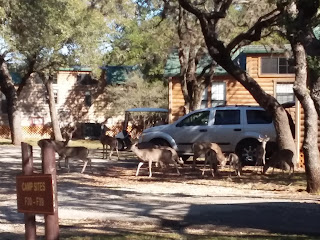 We went to the activity center and looked all around here some pictures what it looks like. 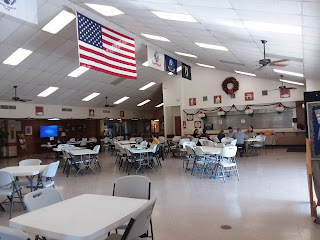 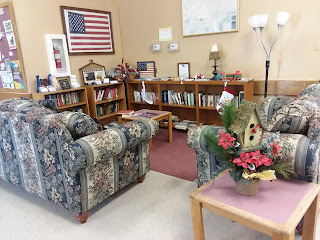 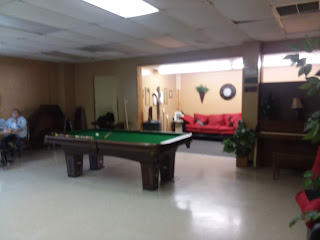 There was a lady in there that was a Solo Traveler Nancy we talked to her for a while. Then we started around the lake on our way back. 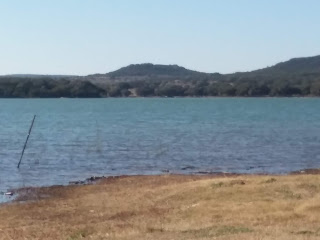 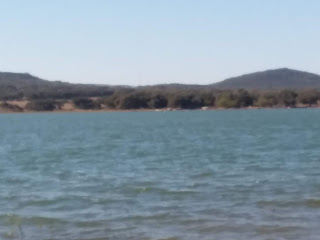 We probably walked at least an hour and a half. So we got back we were starving I put the last load in the dryer and the electric kept going off. Turns out the surge protector kept shutting us off because of high voltage, happened like three times in 10 minutes. I wanted to use my instant pot to make white chicken chili. I didn't  want the pot shutting off, so I made it the old-fashioned way, and was roughing it. Jim called Ranger, and they came over, we're talking about it.  Then another guy came over too, and the four of us had a nice long chat. The one young guy lived here all his life, I said a real Texan, he was telling us about the deer and Lake how large it is. I think it's about 22 miles in circumference if we understood him right. I made Jim a hot dog with sauerkraut I ate a yogurt. And then some of the white chicken chili. Once the electric was stabilized I got the instapot going and made a vegetable soup with chicken that I grilled on the stove, with what I call my Hubcap Grill. We bought it a long time ago at the RV Show and it works really nice. It looks like a hubcap.
Posted by Darlene at 4:29 PM