January 7, 2019 coincidentally we woke up at the same time. Watched The Today Show and local news from Tucson. I made smoothies for us for breakfast, and Jim had some bacon egg and cheese sandwich. Then we went to the office to see about having our mail delivered here. Then we got in the truck and took a drive and looked around Benson. We drove by the school that I used to go to. Jim had to get some stuff in the hardware store. Then we drove up around the mountain areas and looked at all the neat Terrain. Then we looked on the phone for a good place to have lunch. And I found Benson City Grill, was on a golf course. Lunch with a beautiful view, 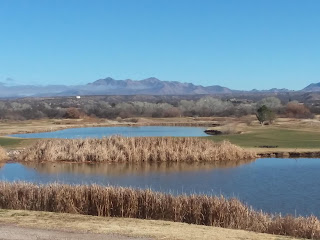 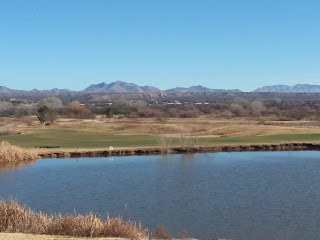 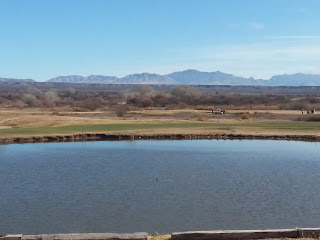 and the food was wonderful too. Jim had a prime rib grilled sandwich, I think that's what they called it, with fries and I had a southwest salad. Then we took a drive, went to the Benson tourist information center. They were very informative. We drove around a little more took a walk around a campground near us. We went into a local grocery store, Safeway Jim brought three bottles of booze for The escapees Bash, and a  couple more grocery items. Then we came home, it was 86 in the camper from the sun shining on it. Opened the door and put the roof vent fans on, it cooled it down quick. Jim put the two burner cast iron stove outside on a picnic table that they just brought us because we didn't have one, and I put my Hubcap Grill on it and Grill more zucchini and chicken. We had that for dinner. Jim called and talked to his mother for a while, then his brother called and he talked to him for a while. Then there was a beautiful sunset he tried to get a picture of it, then we came in had dinner watch some of the new shows that are on tonight took showers did a couple loads of laundry, and went to bed, still don't know what time it is LOL good night.
Posted by Darlene at 7:37 PM

Email ThisBlogThis!Share to TwitterShare to FacebookShare to Pinterest
Labels: Lunch with a View