Our last full day in Arizona, for now. Did our morning routine, blah blah blah. I made breakfast and Jim got ready and went to wash the truck. I cleaned up a little took a quick shower, emphasis on quick. Started getting ready for the vendor sale, which went from noon till 3. It's been a long time since I had a 3 hour work day, but I guess I can handle it. Our goal at one of these is to always earn more money than we spend there. Which in the end we did. I took my plastic bags that I sell, and I had some infinity scarves that I truly forgot I even had till I was looking for something else and found them. Keeps the Cool Breeze off your neck. Jim return when I was taking stuff outside. We took a load down to set up at the tables. I have some pictures of the setup area people were selling jewelry hemp oil, the lady that sang that I liked the other night was selling her CDs so I did buy one of them her name is Killarney Star, she was very good and I really enjoyed her the other day she played almost the whole time we were selling. 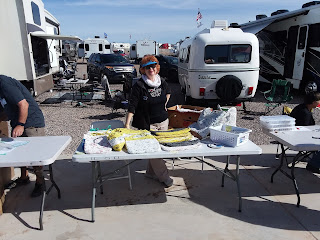 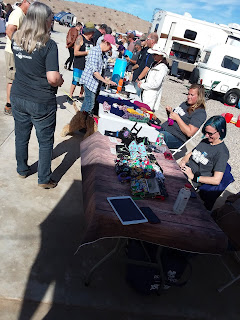 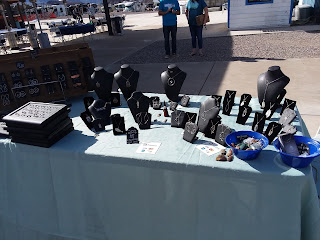 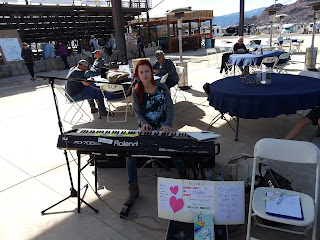 I was right in the Sun and boy did it get hot, first time I felt like my lips were dried out. I had a lady that wanted a water bottle holder so I made a special order one for her. It was fun talking to all the different people. Funny how you see some people over and over and then you see others that you felt like you never seen before. Jim help me carry everything back to the fifth wheel after 3.  I started working on this water bottle holder right away and he started putting stuff away for travel day tomorrow. I was almost finished with the bag took the last little supplies and we went down for the barbecue dinner and farewell party. I wanted to mention something I was talking about yesterday with our battery situation. With all the battery problems we've been having, when we get to California we're going to get AGM batteries, require no maintenance. We're also going to get a battery monitor, Jim prefers Bluetooth. Came back to the farewell party, they had free beer that night three different kinds amber lager, Oktoberfest, and blueberry. The beer was donated by escapees and you could give a donation which went to the CARE Foundation, which is in Livingston Texas for  retired rvers. We got in a long line for the barbecue, it was smoked pork, chicken and beef they called tri-tip. We have been smelling it for 2 days and it was wonderful . You can have it with a bun or without, without a bun you had a sample of all three and they had potato salad and coleslaw and baked beans asides. It was very good. I told Jim I guess there's no dessert. And later I heard someone say they should have had a potluck dessert, I thought would have been a fabulous idea. But we really didn't need dessert. When the meal was over they had a band play. Then we walked up to where the motorhome was with the big telescope, we wanted to do that ever since we got here. The moon is so bright it lit your path. Then we went back down to the party and they had this car that they drove in that was their DJ booth,  Jim has some pictures of it. Jim said it's like a giant jukebox on wheels. 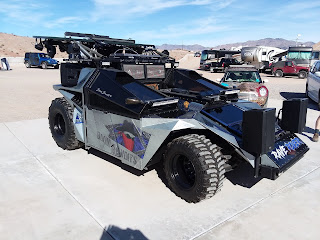 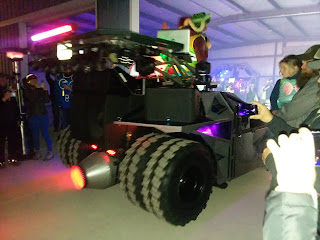 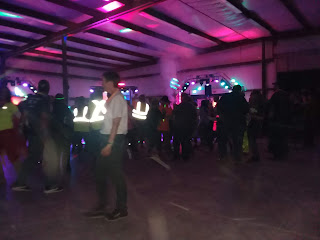 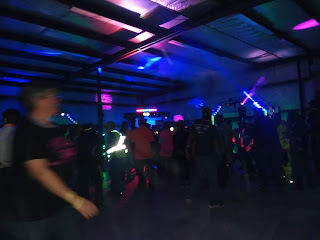 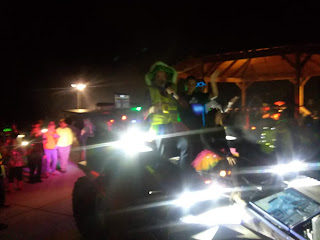 Once the music Started thumping and bumping Jim was finished, so he went back to the FW. I stayed at the party with the young people, till I got back to the FW all the generators were off, and it was quiet. it was really fun such a beautiful evening so bright out. Till I got ready and went to bed it was probably 12:30. Tomorrow's the first traveled in over week.
Posted by Darlene at 9:44 PM