Jeep ride through the desert

Before we left I asked Jim if he thought it would get old having to get up early in the morning to turn the generator on. I think it finally is starting to. So we did our normal morning routine, which included Jim turning the generator on. Jim made plans yesterday to go 4-wheeling in the desert, with a guy he met at the Rally, named Cory. 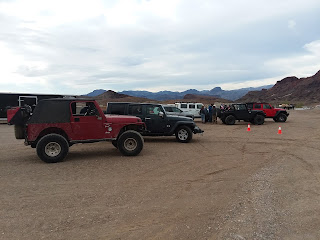 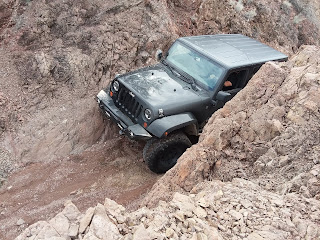 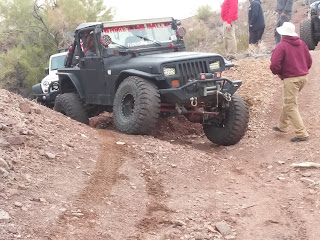 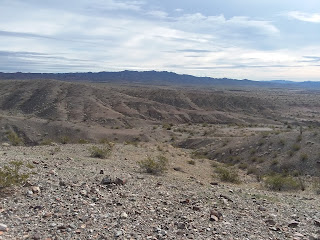 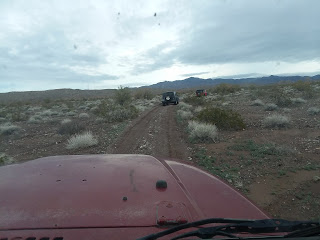 He made some eggs and was going to leave, I said don't you want to make a lunch, or at least take a protein bar and a bottle of water. So he did and then left. He texted me about 10 minutes later and said nobody was around should I knock on the door or wait. I told him just wait it's early. Then I got worried I would miss my relaxing day at home alone. Then he texted me they were about to leave, and I gave a sigh of relief,  no offense hon. I got to relax watch TV shows I wanted to. I packed up and went down and took a shower at their shower house. It was really nice and I left the cleaner than I found it. I cleaned up a little and just chilled, had light lunch, was nice to have quite alone time.  About quarter of one Jim said they stopped for lunch so I figured he'd be right home. So I went and turned the generator off, I thought he would be home soon. Found out later they only stopped for a quick break had ice cream with them. Also had his bar and water. Bet he was glad he took it then. I thought he would fill the generator after it cooled off. But he didn't come back yet, so I went down to see what activities were going on.  Then I saw Jim, they were back, and I went to the talk they had about the upcoming convergence going to Mexico. It was very interesting to hear the process going through the border. I saw Peter and John there the RV geeks and I went to talk to them about our battery situation .  They gave me some good suggestions,  and then  talked to Jim about it and then the two of us went over and talked to him together .  We actually have the wrong batteries  for what we want to use them for,  they're actually are multi-use batteries  and not deep cycle. Plus we killed them by not putting water in and probably drain them too much,  they're only supposed to be drained halfway . Went back with Jim made him something to eat, he was pretty tired so he sat down to rest and I went to see what was going on. They were playing escapees Olympics, played 10  different games that they played teams of four or five, It was fun to watch. I was talking to some people, Jim and I both have a sore throat on and off from all the talking we're doing meeting all the new people. Then they had a guacamole throw down for people to made their best guacamole and the contest winner had over 50 votes, and also won last year.  We did not eat any we didn't like the idea of people putting their hands in the bag of chips, not sanitary and a lot of people weren't feeling well. Jim stayed home for the rest of the night and I went down and they had a jam session that was fun to watch. He texted me, he shut the genny down and went to bed. They played an RV version of the Dating Game. I stopped at the fire on the way back took a little walk around, the sky was beautiful to see, a lot of stars out and the moon was so bright.  It took me a while to warm up and I went to bed.
Posted by Darlene at 8:44 AM

Email ThisBlogThis!Share to TwitterShare to FacebookShare to Pinterest
Labels: it's a Jeep thing